Anti-graft body to focus on livelihoods 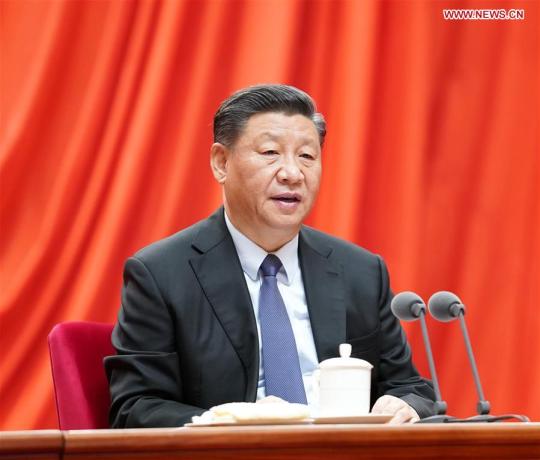 General Secretary of the Communist Party of China (CPC) Central Committee Xi Jinping, also Chinese president and chairman of the Central Military Commission, delivers a speech at the fourth plenary session of the 19th Central Commission for Discipline Inspection of the CPC in Beijing, Jan. 13, 2020. (Photo/Xinhua)

China's top anti-graft watchdog will step up supervision in areas related to people's livelihoods this year, especially poverty reduction tasks, to ensure victory in building a moderately prosperous society in all respects, defeating serious poverty, according to an official communique.

The top disciplinary body adopted the new emphasis on Wednesday, vowing to achieve a high standard of intra-Party and State supervision to boost the country's governance system.

The communique was adopted during the Fourth Plenary Session of the 19th Communist Party of China Central Commission for Discipline Inspection, which was held in Beijing from Monday to Wednesday.

President Xi Jinping, who is also general secretary of the CPC Central Committee and chairman of the Central Military Commission, addressed the session on Monday. He stressed strengthening inspections and supervision of the exercise of power and demanded strict governance of the Party.

He also emphasized upholding and improving Party and State supervisory systems and said the effort would ensure that the Party line and policies are faithfully followed. This will provide a strong guarantee for a more prosperous society and the fight against poverty, he said.

The three-day session considered that 2020 is a particularly important year－the final year for completing the building of a moderately prosperous society in all respects and the last year of the 13th Five-Year Plan (2016-20).

"Strict" governance of the Party must be maintained for a long time, the communique said, describing a system under which officials "don't dare to, are unable to and have no desire to commit acts of corruption". That must be advanced as a whole, it said.

Disciplinary inspection and supervisory organs at all levels should focus on addressing prominent problems that have aroused strong public concern and help promote the fight against poverty, it said.

More inspections will scrutinize performance in poverty alleviation work, the continuity and stability of poverty relief policies and the work to come after anti-poverty goals have been achieved, the communique said.

Officials who fake poverty alleviation data, embezzle public property or make use of their position to gain benefits for their relatives and friends, should be held accountable and punished severely, the communique added.

Attendees agreed. Feng Zhili, the top disciplinary inspection official in Yunnan province, said scrutiny of the performance of Party committees and governments at all levels in poverty alleviation should be enhanced, with a focus on the problem of ignoring the Party's political disciplinary rules.

Disciplinary departments should carry out their supervision responsibility, and those who fail to fulfill it should be held accountable when violations occur, he said.

Wang Lishan, the top disciplinary inspection official in Hubei province, said, "To effectively address the practice of bureaucratism and formalism in the fight against poverty, we must mobilize the public to supervise the work because they see clearly and have deep feelings about such issues."

Xia Hongmin, the top disciplinary inspection official in Guizhou province, said discipline inspection efforts will be made in areas that are directly related to people's well-being, including education, medical care and employment to increase residents' sense of happiness.

The session also concluded that accurate investigations should be carried out to discover and punish officials who provide protection for criminal gangs and otherwise solve problems in ways that harm people's interests, the communique said.

Deepening reforms in the disciplinary inspection and supervisory systems through building a qualified team of discipline inspectors who are loyal, upright and have a high sense of responsibility was also listed as a goal in the communique.