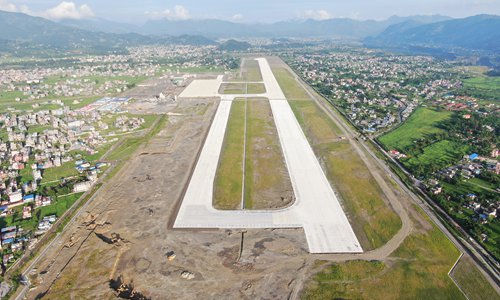 The Pokhara Regional International Airport is the largest China-assisted project in Nepal and a major undertaking of the China-proposed Belt and Road Initiative. It is set to bring job opportunities and economic prosperity to local people, and, more importantly, will have an "instant effect" on Pokhara's tourism once it's completed, a project manager told the Global Times on Thursday.

The new airport is a prioritized "National Pride Project" of the country.

"About 47 percent of the project has been completed," Yang Zhigang, general manager of the No.1 Engineering Department of the China CAMC Engineering Co, who is responsible for the project, told the Global Times in an interview. "The airport is expected to be fully constructed by 2021, but we are striving to complete it before that time."

The runway of Pokhara International Airport, which can handle medium-category jets such as the Boeing 757 and the Airbus 320, was completed by the end of September, according to the company.

"Pokhara, a scenic lake city in western Nepal, is one of the major destinations for tourists, while many tourists were held back by the poor civil aviation situation of the old airport," Yang said.

"Thus, once the new airport is completed, with an annual throughput of 1 million passengers per year compared to around 300,000 per year now, the city's tourism sector is set to welcome more tourists - including those from China," said Yang.

During China's just-concluded National Day holiday, the number of Chinese tourists to Nepal increased by about 16 percent year-on-year, far higher than the growth rate of other markets, Xu Xiaolei, manager of marketing at China's CYTS Tours Holding Co, told the Global Times.

Data provided to the Global Times by online travel platform Mafengwo.com showed that searches for Nepal on its website increased by over 13 percent in the first half of 2019.

To boost that drive further, Nepalese Himalayan Airlines announced that it will operate a direct flight from Kathmandu to Beijing from October 27.

"Apart from the tourist boom, the new airport will also help better connect Nepal with other neighboring countries including India," Yang said.

Yang added that when finding construction workers, the company had adopted a "Nepalese first" strategy and made an effort to hire more local people. 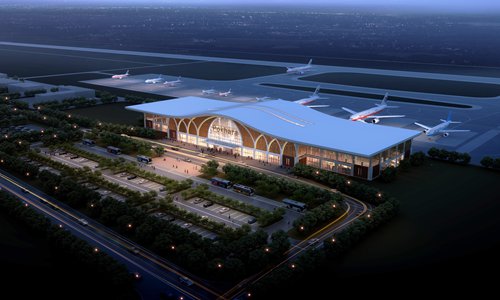 Yang has also been anticipating Chinese President Xi Jinping's upcoming visit, hoping that the high-level exchange will lead to increased infrastructure cooperation between the two countries. "Infrastructure capability in the country is still low, and there are many potential projects here that China could help with. We'd like to help construct Nepal and build more major infrastructure projects like the airport."