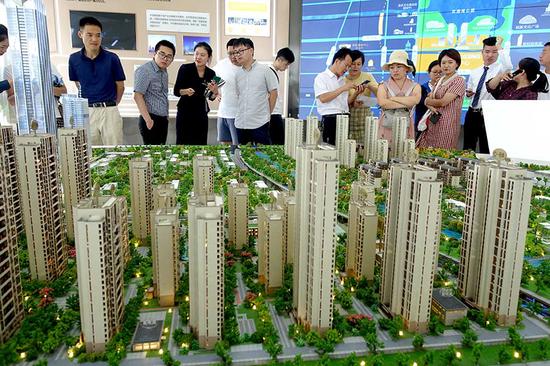 Chinese mortgage loans will become one of the most expensive types of commercial bank lending from next month, and it will be difficult for house buyers to get discounts on the borrowing cost, due to the new interest rate calculation method set by the central bank, analysts said.

Starting from Oct 8, residents who need to borrow money for purchasing new houses should re-calculate the mortgage loan rate based on a new rule announced by the People's Bank of China, the central bank, late on Sunday.

The new rule has locked the rate's lower limits: for the first house, individual borrowers will pay an interest rate no less than the loan prime rate (LPR) with the same maturity. For the second house, the lowest borrowing cost is 0.6 percentage point above the LPR, said a statement on the PBOC website.

The LPR was a new anchor for all bank lending, and the new method was seen as a remarkable achievement of the country's long-lasting market-driven interest rate reform. It is the price of loans banks offer to their best clients, which replaced the existing one-year benchmark lending rate as a reference.

Changing the mortgage loan rate scheme is part of the reform, as the central bank explained, which will generally stay stable at a flat level compared with the previous rates.

"The new rule is for setting the lowest level of interest rate, but the real mortgage loan rate will float up above that," said Lu Wenxi, an analyst with Centraline Property.

The actual mortgage loan rate will depend on the real estate control policy in different regions and whether commercial banks have adequate capital, said Lu.

Liu Guoqiang, a deputy governor of the PBOC, said at a news conference last week that even under the new interest rate scheme, the rate for mortgage loans will not be lowered, as the government will not ease the real estate control policy nor "use real estate as a tool to stimulate short-term economic growth".

E Yongjian, an analyst with Bank of Communications, said that the new personal mortgage loan rate will remain stable, "neither to reduce nor remarkably increase the interest burden" on house buyers.

"That is almost at the same level of the current lowest personal mortgage loan rate," a spokesman with the PBOC said in Sunday's statement. "Compared with the situation before the reform, the interest expense will be basically unchanged for borrowers."

Guo Yuwei, an analyst with Industrial Bank, said that for some regions where the house price is rising faster, the mortgage loan rate is expected to be set higher. "The current property policy has not changed its basic tone－different cities can have different policies and houses are for living in and not for speculative investment."