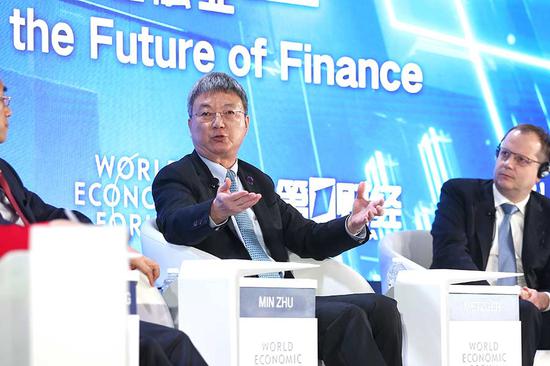 Optimism is on the rise in the financial market after the leaders of China and the United States agreed to resume trade talks during the weekend. Policy observers said that it eased negative sentiment among investors and was an opportunity to reheat the global economy.

The message that the U.S. decided not to add new tariffs on Chinese exports cheered investors in China's financial market on Monday. The CSI 300 index, a tracker of major Shanghai and Shenzhen-listed stocks, rose by 2.88 percent on Monday.

The onshore renminbi spot exchange rate gained more than 0.56 percent to 6.8286 per dollar during trading, its strongest since May 10. The offshore renminbi became the best performing currency in Asia on Monday morning.

The "good result" is actually very important to stabilize the financial market, as well as to stabilize economic growth, according to Zhu Min, head of Tsinghua University's National Institute of Financial Research.

At the ongoing "Summer Davos", an annual event organized by the World Economic Forum in China, Zhu shared his projection that the result of the Sino-U.S. meeting may slow down the U.S. central bank's steps in cutting interest rates, although one reduction is still possible this year.

Earlier, the global market speculated that the U.S. Federal Reserve is likely to lower its policy rates by the end of July, as the escalated trade tensions have strained the world's already bumpy growth.

Uncertainties are still there, however, as significant obstacles remain to obtaining a long-term agreement between the world's largest two economies. In addition, an agreed mechanism for dispute settlement is waiting to be achieved, said experts.

Mari Elka Pangestu, a professor of international economics at the University of Indonesia, said uncertainty could be the most remarkable downside risk at the moment. Uncertainty will delay investment decisions and raise business costs, and consumers will finally pay for that. But at least some of the near-term concerns have been eased a little, she said.

Timothy Stratford, the former assistant U.S. trade representative and the former chairman of AmCham China, said that the temporary truce of the China-U.S. trade war has pleased the business community, which was the "best case scenario".

"We are glad to see that the two countries are going back to the negotiation table," said Stratford, adding that difficulties are still there to achieve a comprehensive agreement between China and the U.S..

He added that difficult issues between the two countries, far more than just trade topics, should be solved through further bilateral dialogues. And the World Trade Organization has to see breakthrough in reforming its 25-yearold multilateral mechanism, and take greater steps toward resolving trade tensions in rules-based ways.

This year, even amid trade tensions, China is able to maintain the world's strongest economic driving force this year, with a 35 percent contribution to global GDP growth, said Jing Ulrich, vice-chairman of global banking and Asia-Pacific at JPMorgan Chase. The world's second-largest economy will reach a total GDP of $29 trillion before 2030, accounting for 90 percent of U.S. GDP, she said.