Lots of jobs on offer in Pearl River Delta region 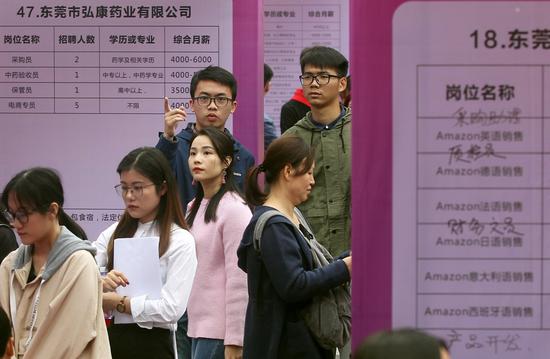 People attend a job fair in Dongguan, Guangdong province, on Wednesday. About 7,000 jobs were offered by 92 enterprises. (Photo for China Daily)

Demand for skilled workers is surging in Dongguan, a traditional manufacturing hub in the Pearl River Delta region, after the Spring Festival holiday, according to various companies and the city's human resources bureau.

"More than 90 percent of workers are willing to return to Dongguan to continue their work," said Jiang Zhou, a publicity official with the bureau.

Apart from the usual need for workers on assembly and processing lines, demand for skilled workers is up this year, Jiang said.

"The city's industrial structure has been upgrading for several years, which helps create demand for skilled workers," he said.

Jiang said Dongguan is organizing 40 large job fairs through March 16 to build a platform to connect migrant workers and enterprises.

At a fair on Wednesday, 92 enterprises, mostly engaged in electronics, e-commerce, computers, logistics, telecommunications, furniture and hotels, offered about 7,000 jobs.

"Senior skilled workers are particularly needed, as our company's business expanded in recent years," said Liu Yiwu of World Precision Manufacturing, which is engaged in the design of automation machinery and the manufacture of precision parts.

"We need more skilled workers in sales, as we are expanding our business to the global market," he said.

A number of cities in the Pearl River Delta region, a major manufacturing and trade hub in South China, have organized job fairs to help migrant workers find employment after Spring Festival.

In Shenzhen, China's testing ground for reform and opening-up, more than 300 job fairs will be held in February alone, according to sources at the city's public employment service center.