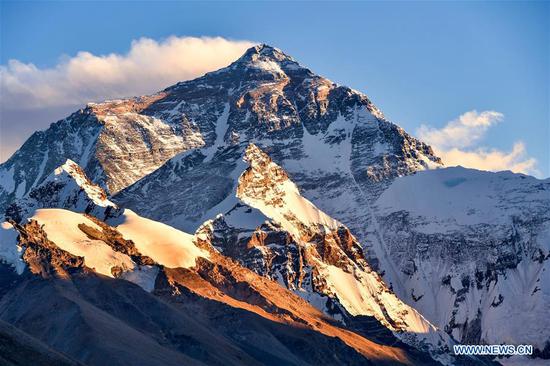 But for travelers who have a climbing permit, the mountaineering activities will not be affected, according to the reserve which was set up in 1988.

Recently, a report went viral online claiming the Qomolangma base camp was "permanently d due to heavy pollution." But local authorities denied the claim.

Kelsang, deputy director with the reserve's administration, said ordinary tourists are banned from areas above Rongpo Monastery, around 5,000 meters above sea level. A new tent camp will be set up nearly two km away from the original one.

Between each April and October, villagers from Dingri County usually set up black tents at the foot of Mount Qomolangma, providing tourists accomodation as a means of earning money.

Though ordinary visitors can't go beyond the monastery, it won't affect them from appreciating the mountain.

"The new tent camp for ordinary tourists can still allow them to clearly see the 8,800-meter-plus mountain," Kelsang said.

Travelers who have a climbing permit can go to the base camp at an altitude of 5,200 meters. Kelsang said the mountaineering activities have been approved by the regional forestry department.

Decades after the epic climb to the world's peak, Tibetans at the foot of Mount Qomolangma have conquered poverty by receiving professional and amateur mountaineers and tourists, who have also posed an environmental challenge to the mountain.

To conserve the environment surrounding Mount Qomolangma, China carried out three major clean-ups at an altitude of 5,200 meters and above last spring, collecting more than eight tonnes of household waste, human feces and mountaineering trash.

This year, the clean-up will continue, and the remains of mountaineering victims above 8,000 meters will be centrally dealt with for the first time.

Meanwhile, the number of people who stay at the base camp will be kept under 300.

Currently, there are 85 wildlife protectors in the reserve, and 1,000 herders have part-time jobs patrolling and cleaning up garbage.

"These measures aim to strike a balance between various demands such as environmental protection, local poverty relief, mountaineering and education," said Wang Shen, county chief of Dingri at the mountain foot.