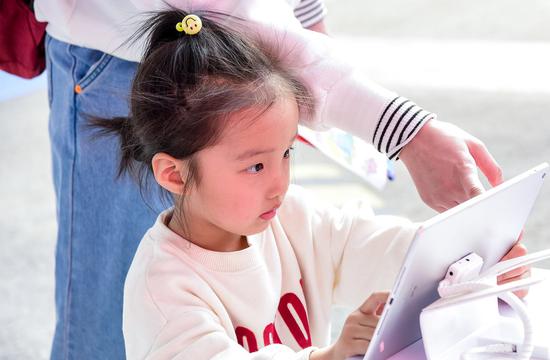 Consumption helps drive import, export growth to 17% in first half

China's international trade in services grew by 17 percent year-on-year to $397.31 billion in the first half of 2018, setting a record even amid the current global economic troubles, the Ministry of Commerce said.

The country's exports in services jumped 22.4 percent year-on-year to $132.09 billion between January and June this year, while imports of services amounted to $265.22 billion, up 14.4 percent from the same period a year earlier, the ministry said in a statement.

Li Yuan, deputy director-general of the Department of Trade in Services and Commercial Services at the ministry, said the high growth momentum was pushed by China's rapidly growing services sector, including computing, industrial solutions and retail businesses, and increasing exports of emerging services such as telecommunications and insurance.

Li said China's services trade will continue its strong run in the near future as the country deploys more resources to stimulating domestic consumption, infrastructure development and high-value-added manufacturing, as well as the Chinese people's surging demand for overseas trips, education and healthcare services.

Trade in services refers to the sale and delivery of intangible products such as transportation, tourism, telecommunications, construction, advertising, computing and accounting.

For years, the government has been putting effort into shifting its economy toward a growth model driven by consumption, services and innovation, thus contributing to global economic growth.

"China has taken steps to improve the development of trade in services, including gradually opening up the finance, education, culture and medical treatment sectors," said Li Guanghui, vice-president of the Chinese Academy of International Trade and Economic Cooperation.

With further improvement in transportation, logistics and communication and e-commerce development in rural areas, Li said rural residents have been unleashing their consumption potential for both goods and services.

Consumer spending was robust in the first half of the year, contributing 78.5 percent to the country's economic growth, up 14.2 percentage points from same period a year earlier, according to the Ministry of Commerce. 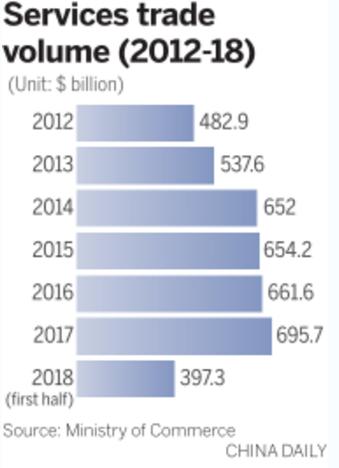 "The competitiveness of China's services trade has been strengthened, and the country is gradually shifting from a power of trade in goods to a services trade power," said Bai Ming, a researcher at the Chinese Academy of International Trade and Economic Cooperation.