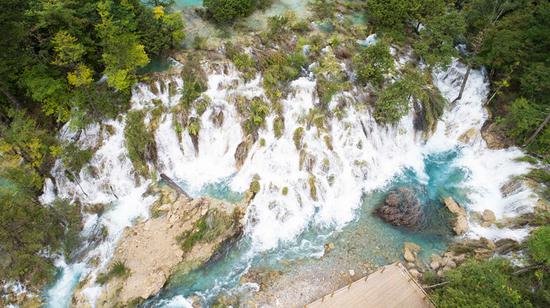 A new waterfall scene has formed after a 7.0-magnitude quake a year ago at Jiuzhaigou National Park in Sichuan Province. (XUE CHEN/XINHUA)

Over the past year, Ren Guiyuan has spent at least four hours every day touring Jiuzhaigou National Park in the mountainous areas of Sichuan Province.

His job is to look for geological hazards at the UNESCO World Heritage site, which was rocked by a magnitude-7.0 earthquake a year ago.

"It may take longer when it rains, because I need to go through every corner," said Ren, who has been working at the park for two decades.

The national park, known as the Jiuzhai Valley, contains about 20 tourist sites and is known for its spectacular waterfalls, lush forests, serene plateau lakes and karst rock formations.

Located in mountains on the eastern edge of the Qinghai-Tibet Plateau, it is one of the most highly acclaimed tourist destinations in China.

But the pristine scenery has been scarred by landslides and falling rocks triggered by the powerful earthquake last August.

The glassy waters of Wuhua Lake, one of the most beautiful lakes in the valley, turned brown after the quake.

A total of 89 places within the park have geological hazard risks.

Many people feared the region's breathtaking scenery would be destroyed.

However, a year later, Wuhua Lake has magically regained its original beauty and shines like an embedded sapphire.

"The water in Jiuzhai Valley comes from underground rivers, so the lake can purify itself. About 85 percent of the park is covered with forest," said Du Jie in the park's management bureau.

But restoration of the whole park will take time and may be dangerous, given the unique karst landforms.

Over the past two months, Jiuzhai county has been hit continually by torrential rains, which again triggered mudslides in the park.

"The mud and rocks flew from ravines down to the roads under construction. We almost failed to escape," Xiong Bo, a worker at the site, recalled.

"One of my other jobs is to inform the workers of possible dangers in time," Ren said.

Now more than one-third of the 89 spots have been restored, but the remaining parts are more challenging to fix, as there is no precedent for how to restore a UNESCO World Heritage site that has been severely damaged by a natural disaster.