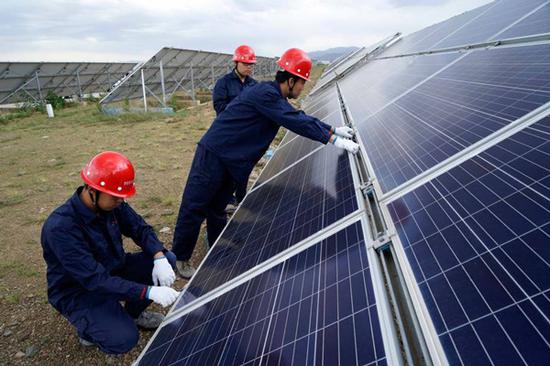 Wind and solar energy will account for about 50 percent of the total power produced in the world by 2050, aided largely by lower production costs, with China leading the revolution, a new report said.

According to the report from Bloomberg New Energy Finance, China will be at the forefront of the increased generation of clean energy, while power storage will benefit from the rapid advances in battery technologies. By 2050, China will take pole position in wind and solar energy market share, as well as the storage batteries market, the report said.

By 2050, China's total installed capacity in wind power (onshore and offshore) and solar power (utility-scale, distributed and photothermal) will reach 1,003 gigawatts and 1,137 gigawatts, accounting for 30 percent and 21 percent of the market share respectively. Its total installed capacity of storage batteries, including small and large-scale ones, is estimated to surpass 154 GW, which will be 14 percent of the global total.

BNEF forecasts that by 2025, China will no longer build new coal plants, owing to the cost factor.

According to the nation's renewable energy guidelines for the 13th Five-Year Plan (2016-20), issued by the National Energy Administration, the country will invest 2.3 trillion yuan ($337 billion) in energy development from non-fossil sources. By 2020, non-fossil sources will account for 15 percent of the total energy consumption, and the same will rise to 20 percent by 2030.

Traditional coal plants have already felt the pressure of the energy transition. In 2014, China's coal-rich Shanxi province issued guidelines urging coal plants in Shanxi to eliminate coal-fired generators of over 300,000 kW capacity to cater to the ultra-low-emission standards set for 2017.

Shanxi Xingneng Power Co Ltd, a traditional coal company in the region, completed the transformation as early as 2015.

"The investment in the first phase was 165 million yuan, while 135 million yuan was spent on the second phase. Our operating costs rose due to the higher standards," said Wang Zhiqiang, vice-president of the company.

Wang told China Daily that coal enterprises must acknowledge the benefits of renewable energy. "However, thermal power generation is fundamental for China as it ensures energy security. Its characteristic of stability is irreplaceable at present."

Li Li, energy research director at ICIS China, a consulting company that offers analysis of China's energy market, noted that given the advantages of wind and solar power, such as cost-efficiency and nonpolluting, energy transportation security should also be considered.