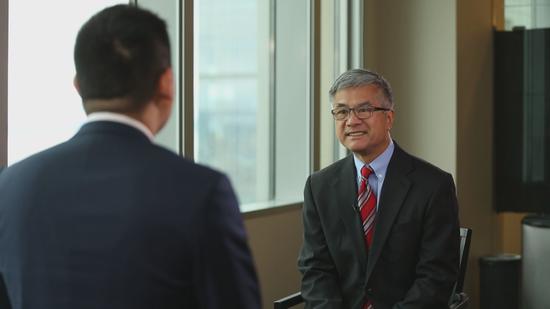 Former US Secretary of Commerce Gary Locke, who also served as the US ambassador to China from 2011 to 2014, speaks with CGTN's Wang Guan in Washington. /CGTN Photo

In an interview with CGTN’s Wang Guan, the former U.S. ambassador to China said tariffs are a “terrible way” to address America’s economic concerns as “there are no winners in a trade war.”

Businesses, exporters and consumers on both sides of the Pacific are bracing for a brewing trade war between the U.S. and China, which has claimed some early “victims,” including soybeans, fruits, wine and steel-consuming industries.

According to a study by Brookings Institution, Washington State has the largest Chinese trade exposure, with over half of its workers employed in sectors at least partially related to trade. And China is the single biggest consumer of Washington State’s exports.

As former governor of Washington State, Gary Locke urged the two countries to sit down and resolve their differences.

He believes the Trump administration must engage in “intensive discussions” with China going forward, instead of confronting China and many of its allies in trade wars.

Locke said some of the U.S. administration’s concerns are valid, such as restricted Chinese market access in certain sectors, equity caps for foreign firms and technology transfers, “but tariffs are the wrong way in which to address those concerns.”