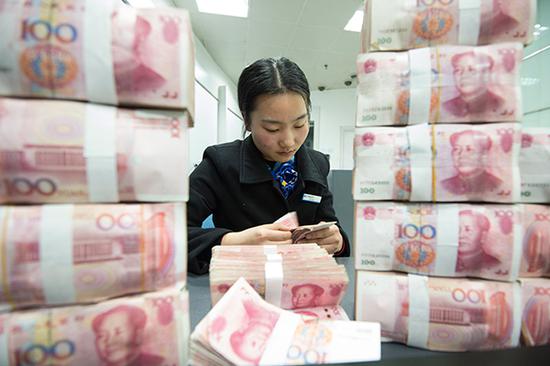 After the Financial Stability and Development Committee met on Monday, analysts expected its key tasks in the near future to be controlling financial deleveraging, ensuring "reasonably adequate" liquidity and fending off any market panic.

They said the targets will be met by applying structural tools and controlling the total money supply. Central bank advisers have denied that the recent fine-tuning of monetary policy is a signal of a broad easing of liquidity.

The 0.5 percentage point, targeted cut of the reserve requirement ratio－cash that financial institutions must set aside as a reserve－took effect on Thursday, freeing up 500 billion yuan ($75.3 billion) for debt-to-equity swap programs and 200 billion yuan for small and micro enterprises.

The country's central bank, the People's Bank of China, has injected 2.8 trillion yuan of medium- to long-term liquidity into the financial sector this year through monetary policy tools.

These tools include two targeted reserve ratio cuts and expansion of qualifying collateral for the medium-term lending facility.

Lending facilities are used by central banks to lend funds to financial institutions. The amount is larger than 1.76 trillion yuan injected during all of 2017, according to the bank.

Discussions on whether the central bank has shifted the tone of its policy more toward easing have arisen recently. The market is looking for clues from the high frequency of monetary policy operations and slight changes of wording in the central bank's recent statements.

"They thought the central bank had started to flood the financial system with cash, but that is not the fact," said Sun Guofeng, head of the financial research institute affiliated with the PBOC.

Strengthened financial regulation since early this year has led to a fast contraction of the shadow banking business－a broad source of funds for financial institutions－and the growth rate of total social financing has declined rapidly. This indicated a relatively tightened monetary environment to support the real economy, according to the central bank official.

The recent marginal fine-tuning comprises only structural operations that aim to drive monetary policy back to a more neutral status that matches the demand of economic growth, without any skew of easing or tightening, experts said.

The current financial regulatory framework, led by the recently established Financial Stability and Development Committee, will be more authoritative and play a greater role in coordinating policies of different government agencies to sustain a prudent and neutral monetary policy, according to the experts.