Premier Li: China to work with EU to safeguard multilateralism 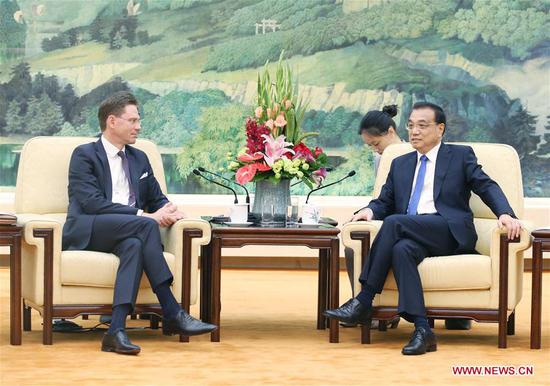 As major economies in the world, China and EU are each other’s largest source of import and major export markets, Li said.

Against the background that destabilizing and uncertain factors are becoming more prominent, China is willing to work with EU to strengthen coordination to safeguard multilateralism and free trade system, promote the liberation and facilitation in trade and investment to contribute to economic globalization, world economic recovery and growth, and send positive and stable signals to the world, Li said.

This year marks the 15th anniversary of the establishment of China-Europe comprehensive strategic partnership.

As a firm supporter of European integration, China hopes EU will maintain its unity, stability, openness and prosperity, Li said, expecting that the upcoming China-EU leaders' meeting next month will have positive and pragmatic results in pushing the negotiations on China-EU investment agreement, and dealing with climate change.

EU and China have reached a series of consensus in this round of high level dialogue, Katainen said, calling on the two sides to oppose protectionism and unilateralism, safeguard multilateralism and free trade system in the current situation.

With regard to the upcoming meeting between the European and Chinese leaders, Katainen said he hopes the two sides will jointly advocate safeguarding the role of the World Trade Organization (WTO) and multilateralism, and witness more positive progress in the negotiations on their investment agreement.