Talks with EU speed up amid headwinds 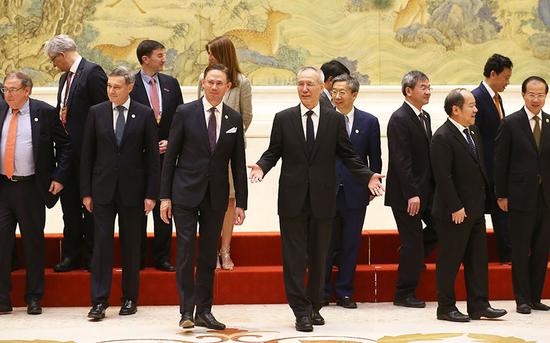 As they gather for a group photo at the Diaoyutai State Guesthouse in Beijing on Monday, Vice-Premier Liu He (center), European Commission Vice-President Jyrki Katainen (third from left in front row) and Chinese and EU officials attend the 7th China-EU High-level Economic and Trade Dialogue. (Photo by Zou Hong/China Daily)

China and the European Union are accelerating negotiation of investment and trade deals amid agreement to defend the multilateral trading system, Vice-Premier Liu He said on Monday.

Both sides agreed to firmly oppose unilateralism and protectionism and prevent such practices from impacting the world economy, which could be dragged into recession, Liu said at a news conference after the Seventh China-EU High-level Economic and Trade Dialogue held in Beijing.

Liu said the dialogue was held as unilateralism and trade protectionism are on the rise and tensions have appeared in economic relations between major countries.

China and the EU affirmed the progress achieved in the negotiations on investment agreements and sought to negotiate their offers during the 20th China-EU Summit in July, according to Liu.

The two sides also agreed to work together to accelerate the process of China's integration.

Li said China stands ready to increase coordination with the EU and jointly safeguard multilateralism and the free trade system.

Katainen added that he hopes the two parties can jointly work toward positive progress in negotiation on the EU-China investment agreement.

Beijing thinks the consensus reached in the China-EU dialogue is in alignment with the road map and timetable for China's reform and opening-up drive, Liu said.

The two sides have agreed to pay attention to and work to solve the market access issues facing businesses on both sides, Liu said.

China hopes that the EU will take practical measures to relax export controls against China, Liu added. Analysts said it would be wise for the EU to do so.

Given that reports have said the U.S. is planning to ratchet up its scrutiny of Chinese investments in key industries, Foreign Ministry spokesman Geng Shuang on Monday urged the U.S. government to view Chinese companies' commercial activities in an objective way. Geng urged the U.S. to provide a fair, sound and predictable investment envi­ronment for them. 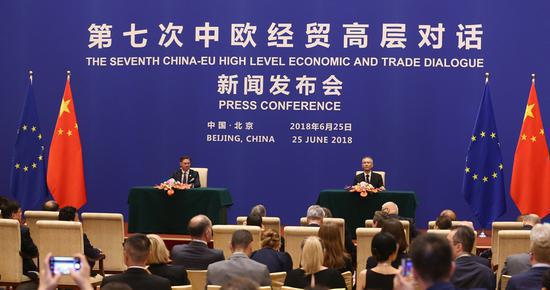 The EU began imposing a 25 percent tariff on about $3.4 billion of U.S. imports last week, including whiskey and motorcycles, to respond to the U.S. announcement in May that it would hit the EU with 25 percent duties on imported steel and 10 percent on aluminum.

There is fear it may be only the beginning of such U.S. measures, experts said.

China and the EU will continue to connect the Belt and Road Initiative to Europe's development strategies, promote positive progress in the China-EU Connectivity Platform and China-EU Co-investment Fund, and further practical cooperation in the digital economy and e-commerce, according to Liu.

As industrial structure and the product quality of high-end manufactured goods between the EU and the U.S. are fairly similar, many European countries should be aware that their exports are under a serious U.S. protectionist threat, said Zhang Jianping, a researcher at Chinese Academy of International Trade and Economic Cooperation.

China and the EU share views on preserving free trade and have huge potential to cooperate on tackling protectionism, Zhang said.