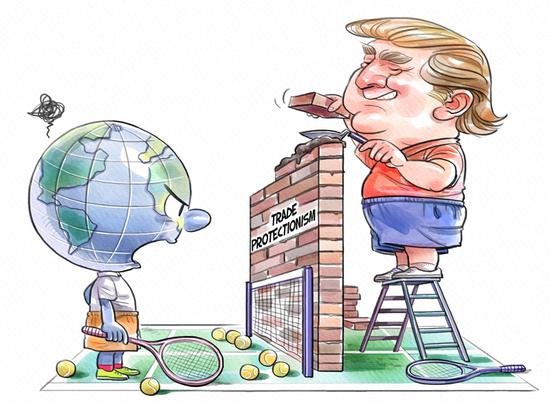 On Monday, U.S. President Donald Trump threatened to impose an additional 10 percent tariff on $200 billion of Chinese goods. That will not only intensify the trade dispute with China but also contribute to new risks of collateral damage to the United States' economy.

And make no mistake, while China is the first target, the next ones will include some of the largest trading economies in Europe, East Asia and the Americas.

U.S. semiconductor chipmakers Intel and Qualcomm, which generate $15 billion each in annual revenue in China, are uneasy by the Trump administration's plans of imposing tariffs on chips imported from China, which has a critical place in their supply chains.

Due to increasing global interdependency, the U.S.' unilateral moves are undermining the profitability and future prospects of not just U.S. and Chinese companies, but also other countries' companies. While Qualcomm needs China's approval for its $44 billion purchase of NXP Semiconductors, the latter is linked with U.S. relief for Chinese telecom giant ZTE, which Trump supports but U.S. Congress has opposed. That means uncertainty to the Dutch NXP's workers, suppliers and buyers.

The leading global technology companies have an estimated $100-$150 billion at stake in the U.S.-China trade conflict.

For Apple and Intel, China accounts for almost a fourth of their revenue (read: $45 billion and $15 billion, respectively). For Broadcom and Microsoft each, a tenth of their revenue ($9-$10 billion in each) comes from China. After Google shut down its Chinese search engine in 2010, it has dreamed about a return. And Facebook CEO Mark Zuckerberg hopes to "re-launch" his site on the mainland. Trump's message to both is: Dream on.

The greater is the Chinese segment in U.S. multinationals' revenues, the greater headwinds they now expect. Boeing's shares are down, as it seeks a cut in the $1.1 trillion that China will spend in the next 20 years to buy new airplanes. After all, Beijing could also purchase its planes from France.

Without a compromise, U.S. businesses may lose $70 billion in energy, agriculture and manufacturing that China has offered to purchase if the Trump administration will suspend tariffs on Chinese products. The energy story alone is alarming. In 2015, when the U.S. lifted its 40-year export ban for crude oil, China's imports of U.S. crude soared to 450,000 barrels a day. It is now one of the largest U.S. markets. But as Trump's tariffs will result in proportionate Chinese retaliation, those profits could dissipate.

In 2017, U.S. exports to China soared to $130 billion. In the absence of a trade compromise, the most lucrative export groups, including civilian aircraft and engines, soybeans, passenger cars, semiconductors, industrial machines, crude oil, and plastic materials, are likely to feel new pressures in the coming months.

China could also defer the huge trade and investment deals that were signed during Trump's visit to Beijing. As the U.S. is erecting new barriers against Chinese investments in the U.S., China can respond in kind, while launching restrictions on imports of U.S. services.

Trump's assault on trade has only begun. The White House's ultimate objective is to target the U.S.' largest trade-deficit partners in Asia (China, Japan and the Republic of Korea), Americas (Canada and Mexico) and Europe (Germany and Italy).

Misled by his trade-hawk advisers, Trump has opted for tariffs that the White House hopes will "break" China's resistance, which will then serve as a warning to the U.S.' partners in the North American Free Trade Agreement and its allies in Europe and East Asia. Yet wishful dreams aren't economic realities.

What these tariffs could (and should) achieve is a united front of the world's major economies that support the global trading regime that has ensured sustained global growth prospects since 1945. That's why China, along with major European and Asian economies, is likely to challenge the U.S. in the World Trade Organization dispute mechanism. That's also why these countries plan to counter every Trump blow with proportionate retaliation.

In the U.S., that means accelerated economic erosion, volatility in global markets and new uncertainty as clouds are darkening over the post-global financial crisis recovery.

The author Dan Steinbock is the founder of Difference Group and has served at the India, China and America Institute (USA), the Shanghai Institutes for International Studies (China) and the EU Centre (Singapore).