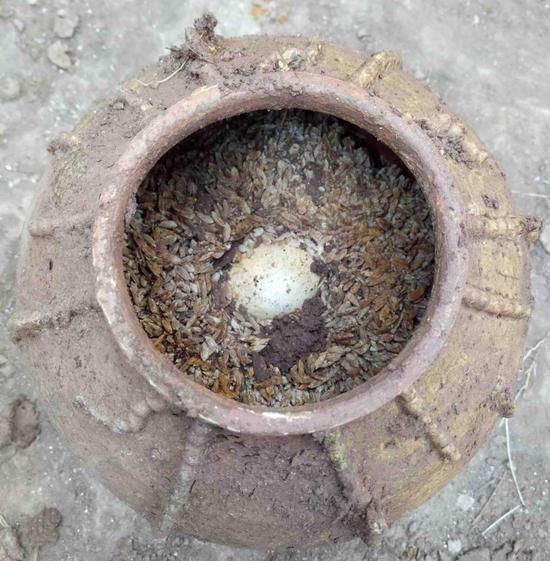 The unbroken eggs and rice in a jar discovered from an ancient tomb in the city of Guang'an, southwest China's Sichuan Province, Nov. 13, 2019. (Xinhua/Tang Yunmei)

Archaeologists in southwest China's Sichuan Province said Monday they had found a jar of rice and unbroken eggs that date back more than 500 years.

The jar was discovered from a Ming Dynasty (1368-1644) tomb in a park in the city of Guang'an, said Tang Yunmei, curator of the Guang'an City Museum. Its epitaph suggests the tomb belonged to Yang Ming, who died in 1501, and his two wives.

The eggs with intact shells were buried in the rice within the jar. Their number was yet to be verified, researchers said.

Tang said the stone tomb was well sealed and had good anti-moisture and corrosion designs, including a 2-5 cm lime layer inside its wooden coffins. The jar of rice and eggs is also protected by a lid.

"The eggs are well preserved thanks to the careful construction of the tomb, which creates a confined space with constant temperature and humidity," said the curator.

Discoveries of unbroken eggs from ancient tombs are extremely rare in China. In one of the few reported cases, archaeologists in March unearthed a jar filled with eggs, with only one broken, from a 2,500-year-old tomb in east China's Jiangsu Province.

In 2015, archeologists in southwest China's Guizhou Province found an egg from a tomb dating back more than 2,000 years, but the shell cracked upon the touch of the researchers' cleaning brush.

Historians are still debating the cultural connotations of putting eggs in tombs. One theory is that it symbolizes continuity of life through numerous progeny, while others suspected that the tomb owners might just have enjoyed eating eggs when alive.

Tang said the newly found egg jar had been sealed for lab analysis using infrared rays, which is expected to verify their number and condition without causing damage.