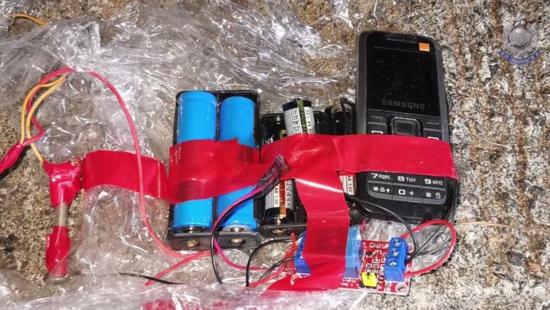 The Hong Kong police said on Tuesday that the discovery of two home-made bombs in Hong Kong's Wan Chai on Monday might not be a single case, warning that criminals may have stored more firearms and lethal explosives in the community.

The police said in a post on social media that upon further inspection by the Explosive Ordnance Disposal Bureau (EOD) on Tuesday morning, the two remote-controlled bombs were proved to be fully functional and readily deployable.

The two bombs were found Monday evening on a slope near the foundation of a building of Wah Yan College, a secondary school in Wan Chai. Bomb disposal officers were deployed and safely defused the bombs on Monday night.

Based on the current findings from intelligence gathering and investigation, the police suspected that the discovery of the two bombs is not a single case, and some criminals are planning to cause casualties in the community with firearms and explosives.

In an operation early Sunday, the police seized a semi-automatic pistol and over 100 bullets suspected to be used by radicals in a demonstration. It was the first time that a handgun has been seized related to the recent unrest in Hong Kong.

The police said on Tuesday that the Organized Crime and Triad Bureau have decided to investigate the two cases as a whole, and are now tracing the source of the ammunition and the concerned criminal group.

"The police will not rule out the possibility that criminals have stored more firearms and lethal explosives in the community," the police said.

Apart from a large quantity of ammonium nitrate, the two bombs also contained many nails, which would remarkably enhance their lethality.

Based on the quantity and nature of the explosives contained in the bombs, the EOD estimated that they were capable of causing casualties in a range of up to 50 to 100 meters in the surrounding area.

The bombs, if detonated in a busy area, will indiscriminately hurt everyone within the range and lead to very severe casualties, said Bomb Disposal Officer Suryanto Chin Chiu.