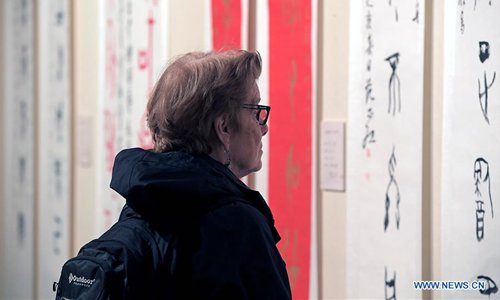 China's national museum on Tuesday launched a large exhibit of oracle bone inscriptions for the first time in Beijing to mark the 120th anniversary of the discovery of one of the earliest forms of Chinese writing.

Carved on tortoise shells and animal bones, the primitive form of Chinese characters is the oldest fully-developed characters in China, and the only ancient text in the world passed down to the present. In 2017, the bone inscriptions were included in the UNESCO Memory of the World Register.

Oracle bone inscriptions collected from other institutions such as the National Library of China, Shandong Museum and Nanjing Museum will also be on display.

While scholars may hold different views about the exact number, roughly 4,000 characters have been discovered on about 130,000-170,000 oracle bones unearthed in China, among which only about 1,500 words have been identified so far.

Since their discovery 120 years ago, the study of oracle bone inscriptions has become an influential discipline in the world, said Huang Dekuan, chairman of the Chinese Writing Society.

"The study of oracle bone inscriptions is very challenging. While the focus of our future study will still be to identify the characters, we have also been using new methods and technology to go through the research again, including big data, cloud computing and new ways of processing images," Huang said, noting that more efforts will be made to continue trying out new methods.

Many scholars from Japan and Europe paid attention to the study early on and launched studies on oracle bone inscriptions. International scholars' participation also contributes to developing the study, Huang said.