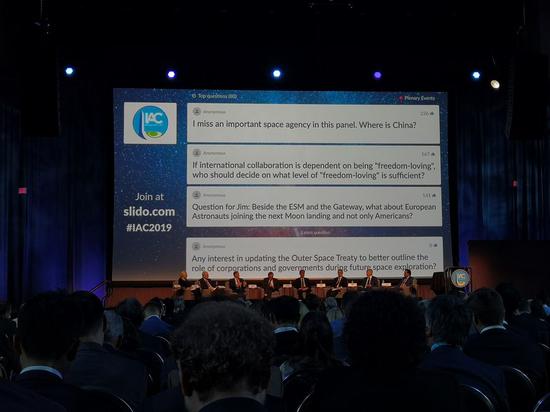 Photo taken on Oct. 21, 2019, shows a plenary of the International Astronautical Congress in Washington D.C., the United States.(Xinhua/Zhou Zhou)

"I miss an important space agency in this panel. Where is China?" Attendees at a plenary of the ongoing weeklong International Astronautical Congress (IAC) in Washington brought the question atop the panel voting system and demanded an answer.

The crowd-sourced question popped up after the audience found that Wu Yanhua, vice administrator of China National Space Administration (CNSA) scheduled to speak at the IAC kickoff event on Monday with officials from five other national space agencies, was conspicuously absent.

Pascale Ehrenfreund, the incoming president of International Astronautical Federation (IAF), which is IAC's organizer, attributed Wu's no-show to "time conflict," but some attendees at the meeting hinted at "visa problem."

The difficulty for Chinese scientists in obtaining a U.S. visa has been an issue of concern for a while. At a press conference on Sunday, the IAC organizing committee co-chair Vincent Boles said they started working with the U.S. State Department 18 months ago to ensure timely grant of visas for attendees. But such efforts seemed to be of little avail.

QHYCCD, a telescope maker, is among a small number of Chinese companies that made it to this year's IAC exhibit hall. Bi Tingting, the startup's sales manager, told Xinhua all technicians with her company had failed to get a U.S. visa.

China hosted the IAC in 2013 and has always been an active participant in the conference which championed international collaboration in space exploration. At IAC 2018 in Bremen, Germany, China Aerospace Science & Technology Corporation and China Aerospace Science & Industry Corp, two rocket-making giants, made quite an impact when they showcased their latest technologies, but they didn't appear at the ongoing Washington conference either.

The United States has for some time been denying visas to, delaying processing visa applications of, revoking long-term visas for, and searching and harassing Chinese scholars, students, entrepreneurs and scientists, Geng Shuang, China's Foreign Ministry spokesperson, told media on Oct. 9.

Observers say that the U.S. authority has increasingly attempted to block or disrupt normal people-to-people exchanges between China and the United States. At the opening ceremony, U.S. Vice President Mike Pence claimed that his country would only "work closely with like-minded, freedom-loving nations, as we lead mankind into the final frontier."

"Why not work with China on the 'international' Gateway (a U.S. moon-orbiting lab to be built) like we have with Russia for decades?" "If international collaboration is dependent on being 'freedom-loving,' who should decide on what level of 'freedom-loving' is sufficient?" Those two questions from the audience were also spotlighted in the voting system on Monday.

Pence's apparent attempt to politicize science collaboration is not welcome even in the United States. About 200 people from the country's astronautical community signed a letter condemning the inclusion of Pence at the opening ceremony. They considered his attendance at odds with the IAC's mission of global collaboration.

Jan Woerner, director general of European Space Agency (ESA), also disagreed with Pence. He told Xinhua that no one should forsake collaboration altogether just on account of potential problems or risks.

His view was echoed by Buzz Aldrin, one of the first two humans to land on the Moon and who received IAF World Space Award in 2019. Aldrin said at a pre-conference seminar on Sunday that he is not a fan of "Gateway," but this program should include China as part of the international collaboration.