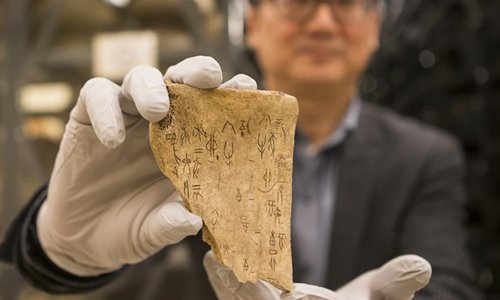 The Education Ministry Tuesday announced that seminars, forums and exhibitions will be held to commemorate the 120th anniversary of the discovery of oracle bone inscriptions, the first national commemoration since the ancient characters were discovered more than a century ago.

An international academic seminar will be held Friday to Sunday in the city of Anyang, Central China's Henan Province. Some 200 scholars from countries including the U.S., Russia, Japan and South Korea will visit to discuss global cooperation using big data and cloud technology in the study of the ancient inscriptions,  said Li Xiaoyang, chief of Anyang cultural heritage administration, People's Daily reported.

Liu Zhao, a professor of Shanghai-based Fudan University, told the Global Times on Wednesday that"China has made remarkable progress in oracle bone inscriptions interpretation under the help of high-technology such as big data, 3D printing and scanning."

A cultural exhibition will kick off Tuesday at the National Museum of China in Beijing, the first time for oracle bones to be exhibited on such a mass scale. Multimedia tools will explain the characters and their significance to visitors, Beijing Daily reported.

Nationwide activities will reflect on the achievements in research and protection of oracle bone inscriptions, interpret their role in Chinese and world history, and showcase traditional culture, Tian Lixin, head of the ministry's department of language information management, said at a press briefing on Tuesday.

Oracle bone inscription is the earliest known example of systematic characters in China.

The characters document the history of the Shang Dynasty (1600BC-1046BC) including information of sacrifices, praying, king's affairs, weather, harvest and military affairs.

Oracle bones were included in the UNESCO Memory of the World Register in 2017 in recognition of their cultural and historical value.