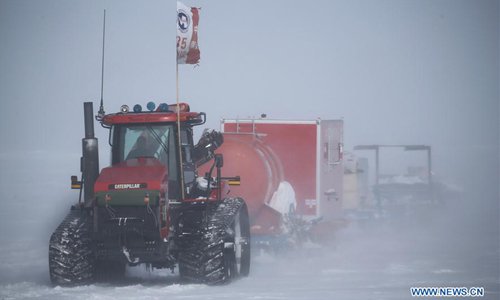 China began to operate its first homemade polar energy system, which can withstand the extreme coldness and provide sustainable electric power for scientific research in the Antarctic uninterrupted for a year.

The unattended system was installed at the Taishan Station, ending insufficient electric supply at one of China's four research stations on the southernmost continent.

Scientific experts stressed that this accomplishment has lifted the restrictions from other countries to our scientific research in the Antarctic, which will protect our research results in the South Pole and China's national interest.

The energy system called "Dong Da Ji Neng," developed by China's Southeast University, was shipped to Shanghai for China's 36th Antarctic expedition on Tuesday and will be loaded on the icebreaker Xuelong to the South Pole next Tuesday, the Science and Technology Daily reported.

The report said that the "giant power bank" can resist temperatures as low as minus 80 or 90 C in the Antarctic and remotely monitor the research station via satellite. The energy system looks like two containers - one control cabin and one power generation cabin, with six generator sets from solar energy and fuel oil.

Wei Haikun, Executive Dean of the School of Automation at Southeast University, told the newspaper that his team can conduct remote real-time monitoring of energy modules through iridium communication.

Taishan Station is located 2,621 meters above sea level where the annual average temperature is minus 36.6 C, and researchers can only work with an insufficient conventional generator to the station in summer for about one month.

China's power generation equipment at another station, Kunlun Station, is provided by foreign countries, but it has malfunctioned many times, Dong Yue, a research fellow at the Polar Research Institute of the Ocean University of China, told the Global Times. "If those countries cut off the system at the Kunlun station, our scientific research in the region will be restricted by those countries," Dong noted.