As Beijing prepares to host the 7th Summit of the Forum on China-Africa Cooperation (FOCAC) on September 3-4 focusing on political and economic cooperation, recent data highlights how China has intensified its efforts to enhance the cultural dimension of its relations with African partners by establishing over 70 Confucius Institutes and classrooms across the continent in the last 14 years.

From zero presence in Africa before 2005, the number of Confucius Institutes has risen to a total of 48 in 2018, according to data compiled by Development Reimagined, a Beijing-based international consulting firm working in the field of China-Africa relations.

The data also shows that between 2007 and 2018, China has set up 23 Confucius Classrooms in Africa with seven more planned by the end of 2019.

“Cultural exchanges are crucial for Chinese and African people to understand each other and for the two sides to further consolidate their relations,” David Monyae, co-director of the Confucius Institute at University of Johannesburg, South Africa, told Xinhua News Agency in an interview last month.

“People-to-people exchanges should be a priority in China-Africa relations since the two sides need to better understand each other's culture, history and even law. There’s a growing interest among the African youths to know more about China,” Monyae said, explaining the significant jump in the numbers of Chinese cultural centers in the continent.

The Confucius Institute program began in 2004 and is overseen by the Office of Chinese Language Council International, also known as Hanban. The institutes operate in co-operation with local affiliate colleges and universities around the world, and financing is shared between Hanban and the host institutions. The related Confucius Classroom program partners with local secondary schools or school districts to provide teachers and instructional materials. 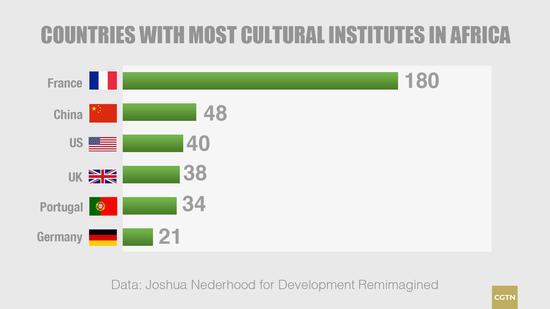 The 48 Confucius Institutes put China just behind France – with 180 centers of Alliance Francaise – when it comes to the number of international cultural centers in Africa, and much ahead of the US (40 centers), the UK (38), Portugal (34) and Germany (21).

In comparison, the first Confucius Institute was set up in December 2005 at the University of Nairobi in Kenya. This is what makes the rapid outreach of the Chinese cultural centers more striking.

“With the strengthening of China-Africa ties in recent years, more African countries are doing business with China and naturally there’s more curiosity about the country and willingness to understand its culture,” South African journalist Omphitlhetse Mooki told CGTN Digital, explaining the phenomenal surge in the number of Confucius Institutes in the continent.

“I think China is also doing its part in an effort to get the world to understand it. If you open up you’ve got a lot of work to do to get people to understand you,” said Mooki, who’s currently in Beijing as part of the China-Africa Press Center exchange program.

Having analyzed the data on cultural institutes in African countries in depth, Joshua Nederhood of Development Reimagined observed that the Confucius Institutes “tend to flourish in countries that value China's culture more than its investments.” 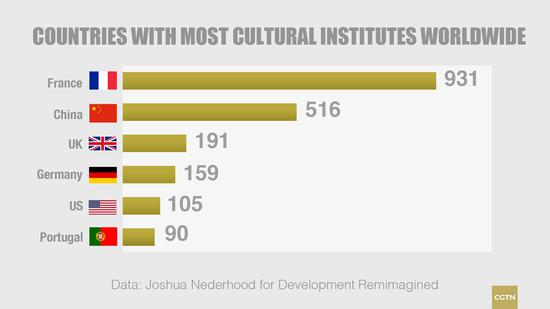 Even worldwide, with 516 Confucius Institutes spread across 142 countries and regions, China ranks second behind France’s 916 cultural institutes, according to the data analyzed by Development Reimagined. The UK (191 centers), Germany (159), the US (105) and Portugal (90) comprise the top six countries with cultural institutes abroad.

Since the Confucius Institute was established in 2004, more than seven million students have been trained worldwide and 2.1 million are currently pursuing their studies.

The purpose of Confucius Institutes is strengthening educational and cultural exchanges and cooperation between China and other countries and enhancing mutual understanding and friendship between their peoples, according to a statement by China’s Ministry of Foreign Affairs.

“Confucius Institutes are warmly welcomed in many countries and they have played an important role in promoting mutual understanding, friendship and cooperation between China and relevant countries,” Foreign Ministry Spokesperson Hua Chunying asserted in March this year.

Echoing the ministry’s statement, Ishmael Mensah, the local director of the Confucius Institute at the University of Cape Coast, Ghana, told Quartz Africa that the goal of his institute is “to foster a closer collaboration between the Ghanaians and the Chinese.”

Mensah said that teaching Mandarin puts young Ghanaians in a “better position to interact with their Chinese peers.” Mensah noted that the classes offered are gaining popularity and teach roughly 2,000 students per term at the university.

'Language that goes to heart' 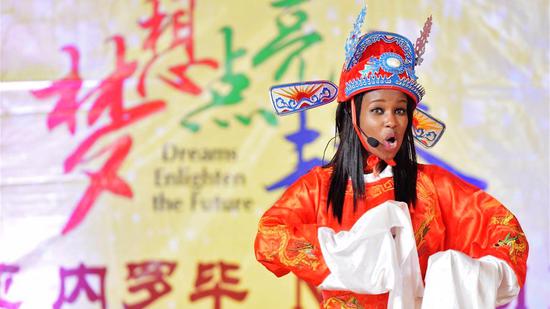 African youths are increasingly getting drawn towards Chinese language driven by the ambition to land a dream job in China or benefit from China’s increasing engagement.

“I’d like to believe interest in the Confucius Institute might be driven by the curiosity to understand not only the language, but the Chinese culture as well because to fully understand a person you need to understand both,” noted Mooki, who registered for Mandarin lessons in 2013.

Elaborating on the need for Africans to learn Chinese, Monyae, who is also an expert on international relations and foreign policy, said: "There were a lot of reports that we heard in the past about China, but they were not told to Africans by Chinese, but by Westerners, who dominated the media."

"There's a danger if the picture you are shown is not true," he said.

"But people now are growing much more aware that they want to know China from the Chinese people. So it is also the mission of the Confucius Institute to serve as a bridge for that," he explained.

China is Africa’s most important economic partner, according to a research released by McKinsey last year, but with the spread of Confucius Institutes, Beijing is increasingly creating a large cultural footprint across the world’s fastest-growing continent.