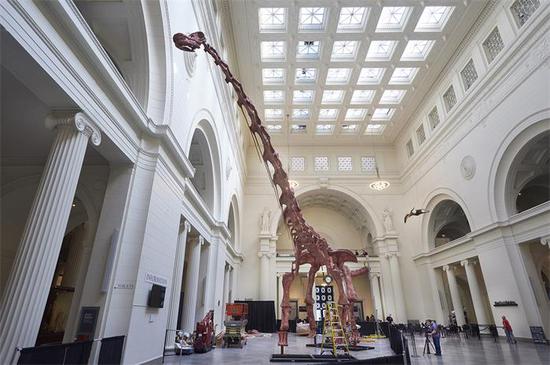 The biggest dinosaur called Maximo is exhibited at the Field Museum in Chicago. (Photo provided by Jian Ping to China Daily USA)

The cast of the biggest dinosaur ever discovered stands tall and extends far beyond the area that used to be taken by the popular fossil of SUE the T. rex in the large Stanley Field Hall at the Field Museum.

The new dinosaur is made from the fossil bones of a long-necked Patagotitan mayorum from Argentina, part of a group of dinosaurs called titanosaurs.

"The installation took three days," said Bill Simpson, head of geological collections at the museum, as two workers finished the final phase of installation by connecting the dinosaur's head to its long neck on May 25.

The dinosaur is called Maximo, meaning "maximum" in Spanish. From head to tail, it stretches 122 feet. It is so tall that its head overlooks the second-floor balcony of the museum, where visitors can easily take a selfie with it.

Simpson said that the red-colored cast reflects the actual fossil color because the soil where the dinosaur was discovered is rich in iron. 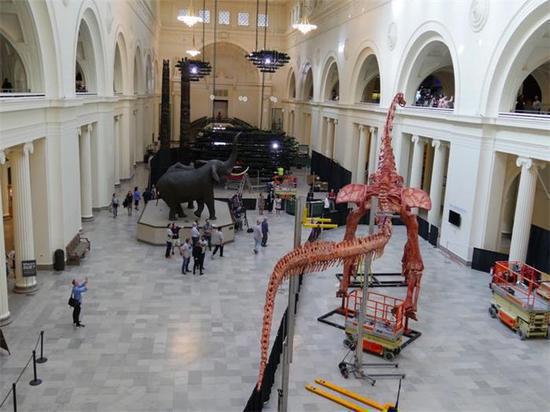 The biggest dinosaur called Maximo is exhibited at the Field Museum in Chicago. (Photo provided by Jian Ping to China Daily USA)

The dinosaur is so enormous that it makes the two elephants on display next to it look small.

"What's so special about Maximo is its size," Simpson said. "Stanley Field Hall is 300 feet long. People can really get a good sense of its scale."

The dinosaur exhibit will open to the public on June 1. Five pieces of the dinosaur's real fossils also will be displayed by its side for two years.

"Different from SUE, the cast will allow visitors to walk under it and touch it," said Hillary Hansen, senior exhibitions project manager, the first-ever display to permit such access by visitors.

Hansen said that five people from Museo Egidio Feruglio, the museum in Patagonia, Argentina that owns the titanosaur fossils, are in Chicago to provide assistance for the move and installation.

It is the second Patagotitan on display. The other cast is at the American Museum of Natural History in New York.

Simpson said that due to its size and the limitation of space, the head and tail of the Patagotitan in New York are in two different rooms.

Meanwhile, SUE the T. rex will be moved to the Field Museum's permanent exhibition, The Griffin Halls of Evolving Planet.

"Evolving Planet will showcase SUE and reveal the story of her life on Earth," said Hansen.

According to Hansen, the revamped showroom for SUE will feature multimedia technology and digital interactivities.

"The most dramatic change to SUE will be the addition of her gastralia," added Hansen.

Gastralia is a set of bones that look like an additional set of ribs stretched across the belly.

Hansen said that gastralia are rarely preserved in tyrannosaurs, and scientists weren't quite sure how to position them when SUE's skeleton was first mounted in 2000.

The addition of SUE's gastralia will change her look, explained Associate Curator of Dinosaurs Pete Makovicky.

"T.rex had a bulging belly – it wasn't sleek and gazelle-like the way you might think from looking at SUE now without her gastralia," said Makovicky.

SUE will be unveiled in her new home in the Evolving Planet exhibition in early 2019.

The arrival of Maximo is part of the celebration of the Field Museum's 125th anniversary and was made possible by a $16.5 million gift from the Kenneth C. Griffin Charitable Fund.

"Field Museum has always been a leader in displaying dinosaurs," said Simpson. "We want to continue to be the leader in the field."