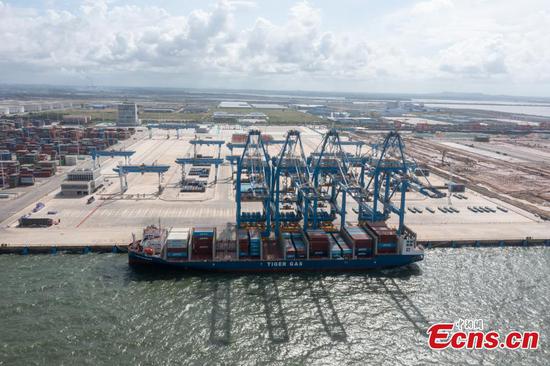 The terminal, located in Guangxi Zhuang Autonomous Region, has two 100,000 ton-class automated container berths. With 518.5 meters of shoreline and 15.1 meters of water depth, its annual handling capacity reaches 1.02 TEU. The sea terminal is connected to a railway station to realize sea-rail transportation.

Guangxi is an international corridor connecting China and Southeast Asia and the strategic pivot of the opening up and development of southwestern and south-central China, it was noticed.

The Beibu Gulf Port Qinzhou Terminal is an important hub and portal of the Belt and Road Initiative.

The transportation of import and export goods from Southeast Asian countries and the inland areas of western China can reduce by about 10 days through the Beibu Gulf Port compared with eastern parts of China.