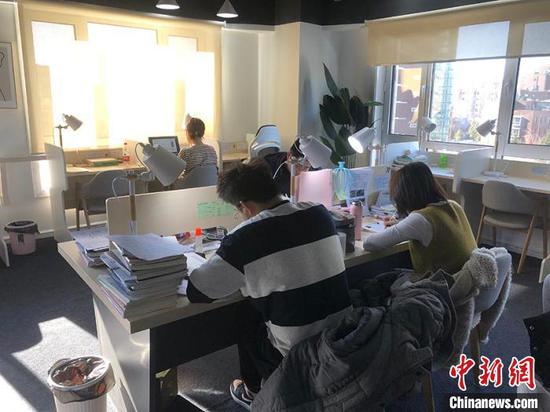 (ECNS) — Monthly-paid shared study rooms have become popular in many cities across China, attracting both students and white collar workers.

Some shared study rooms in Beijing include those with in-house and natural light, silent mouse zones, and immersive areas that simulate night. Some household appliance like ovens, drinking fountains and refrigerators are also present.

"In the peak period, you have to book a room online four or five days in advance," said a woman surnamed Han, preparing for her postgraduate entrance exam in Beijing's Xicheng District. She said the majority of users are office workers and high school students.

Chinese aged between 25 and 35 accounts for the largest user group of shared study rooms while white collars show the most willingness to pay for the service, according to a report by local shopping platform Meituan in 2020.

Reasons for studying in such an expensive room are diverse. The report points out electronic devices and entertainment distract attention, with the atmosphere in shared study rooms more suited to users wanting to concentrate on their studies.

Senior high school student Xinyi (pseudonym) said her phone addiction while in the shared study room makes her feel "guilty". "Besides, using the room costs (me) about 10 yuan an hour, which isn’t cheap. I wish my work ethic could equal the cost."

"Middle to large libraries in China have problems, such as too many users or some other inconvenience. Although shared study rooms have drawbacks, they can fill in the blank left by more public facilities," said Chu Zhaohui, an analyst from the National Institute of Education Sciences.