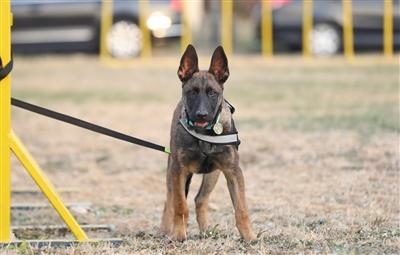 Trainers put badges, colored collars and uniforms on the four-legged recruits during a ceremony at the Police Dog Base of the Beijing Municipal Bureau of Public Security.

At the command of their trainers, the cloned dogs, who are nearly four months old, also showcased some of their skills, including picking up an item and launching an attack.

Ma Jinlei, a police officer engaged in dog training techniques, said one task of the base is to research how to pass down the genes of excellent police dogs.

The six dogs was cloned from skin samples of two star police dogs that have played important roles in safety missions.

Beijing police launched the project earlier this year in cooperation with SINOGENE, a company that provides technological solutions to cloned pets.

The six dogs were birthed by three surrogate dogs at the base in August, four of the six being from the same litter. Their DNA is more than 99 percent the same as the donor dogs.

Established in 1954, the base has produced 1,978 police dogs, which have served in a broad range of safety missions, including crime investigations and anti-explosive checks, across the capital city.