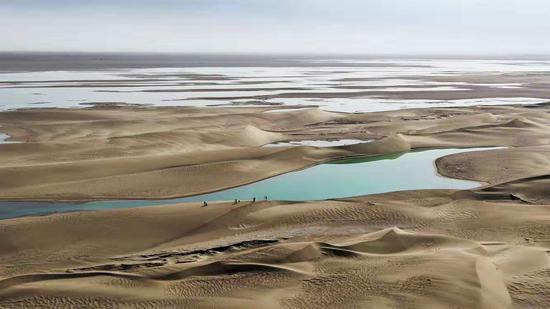 Halaqi Lake used to be the final destination of Shule River, which flows generally westwards from Qilian Mountains through the Tibetan Plateau and desert regions, unlike most of China’s east-flowing rivers.

At its peak, the lake covered 200 square kilometers and boasted about 800 square kilometers of wetlands. Due to desertification and irrigation diversions, the flow of Shule River was reduced so significantly that the lake disappeared for hundreds of years, surrounded by Kumtag Desert.

Dunhuang West Lake became a national nature reserve in 2003 amid efforts to preserve its wetlands and habitat for rare animals and plants. Gansu also increased management of Shule River through efforts such as improving efficiency in agricultural irrigation.

As a result, Halaqi Lake now covers 5 square kilometers along the border of the nature reserve and Kumtag Desert.