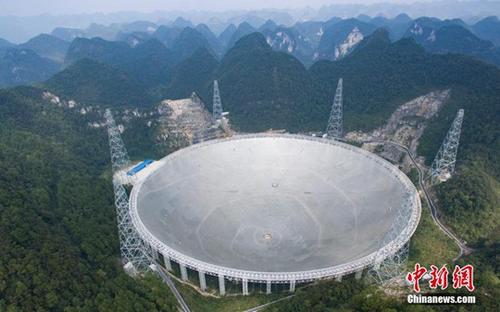 There have been less than 100 fast radio bursters (FRBs) discovered, and FRB 121102 is the only one that has been detected erupting more than once, with the previous detection in 2015 by the Arecibo radio telescope. Repetition is considered important for those trying to unravel the nature of these mysterious objects.

Now FAST, located in a naturally deep and round karst depression in southwest China's Guizhou Province, has also detected multiple eruptions from FRB 121102, thought to be located in a dwarf galaxy about three billion light-years from Earth.

Zhang Xinxin, an associate engineer with the National Astronomical Observatory of China, said FAST first detected the pulse on the morning of August 30 after searching for more than a month.

In the following days it detected tens of pulses — more than 20 on Sept. 3 — meaning that globally FAST has captured the largest number of pulses from FRB 121102, Zhang said.

FAST has discovered 93 new pulsars since its trial operation in Sept. 2016. It has also been charged with the exploration of interstellar molecules and communication signals.