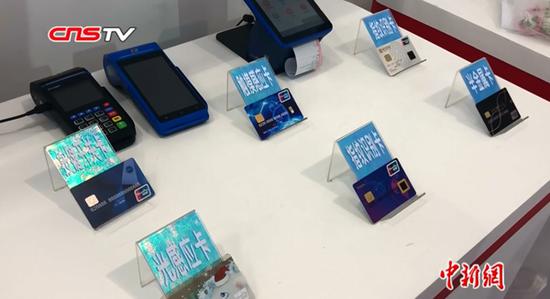 Bank cards with new functions are displayed at the second Digital China Summit in Fuzhou, Fujian Province. (Photo/Screenshot on CNSTV)

(ECNS) -- Bank cards with new functions such as fingerprint recognition and light sensitivity will be under the spotlight at the upcoming second Digital China Summit, to be held from May 6 to 8 in Fuzhou, Fujian Province.

Cao Yu, head of the technology department at China UnionPay, said the card will ensure a high level of safety and be used for real-name identity authentication. The card's sensor can initially record the fingerprint information of the cardholder, then store the information with encryption.

The light-sensitivity card can automatically shut down payment functions when put at a place where there is no light.

Bank cards with other breakthrough technologies will also be presented at the summit.

The focus of the 56,000-square-meter exhibition is to highlight the progress that has been made in digital governance and the digital economy.

There are also sub-forums planned for the summit focusing on 12 themes, including intelligent society, Big Data, the industrial Internet, digital health and the Internet of Things.