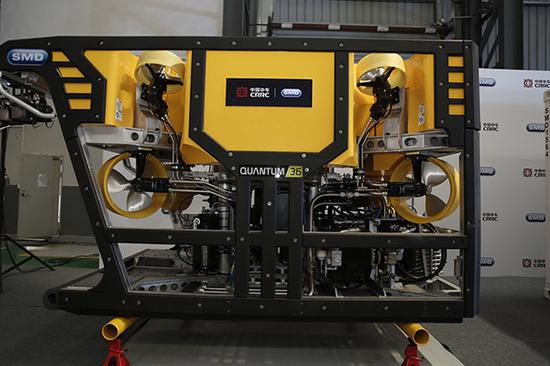 (ECNS) - China's rolling-stock manufacturer CRRC announced a milestone in the development of deep-sea equipment as it unveiled the country's most powerful remotely operated vehicle (ROV) in Shanghai on Tuesday.

The submersible boasts a 250hp propulsion capability, the most powerful in the world, and can dive to a depth of 3,000 meters and lift four tons.

There are generally two types of remotely operated vehicles—survey or inspection ROVs are used for scientific research, seabed exploration, and sampling, while the more powerful work-class ROVs are used for marine salvage and underwater construction operations, according to Zhuzhou CRRC Times Electric.

While work-class ROVs are usually less than 150hp, CRRC has set a record with this new powerful underwater mobile device. The device is also able to carry out real-time monitoring of underwater operations with a range of one to three meters depending on visibility.

Chen Jian, deputy general manager of Zhuzhou CRRC Times Electric, said the ROV will be mass-produced in the future and further developed to make it smaller, unmanned and intelligent.