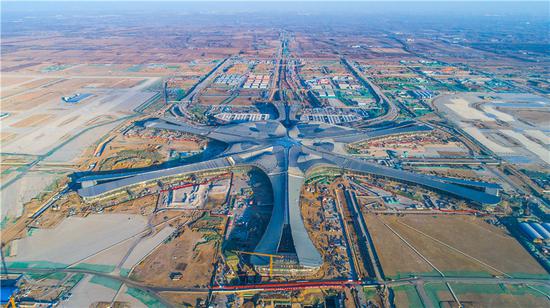 The "sponge" design of Beijing's new airport has been completed, and construction to maximize its environmental and economic effects is underway, designers said.

"Sponge airports and sponge cities mimic sponges, a reference that literally means to absorb, store and purify rainwater and utilize or discharge it when it needed," said Wang Tong, supervisor in the support project department of the Beijing New Airport Construction Headquarters. He is in charge of sponge airport design at the new facility.

"Compared with cities, airports have a larger proportion of asphalt and concrete because of the runways. So it's more difficult to absorb and retain water."

The new airport, located at the border of Beijing's southern Daxing district and Hebei province, the airport is expected to become the world largest by passenger volume by 2040. The long-term goal is to handle 100 million passengers annually. It will serve as the capital's second international airport to ease congestion. It is scheduled to open on Sept 30, 2019.

"As a sponge airport, it will tackle three obstacles, all about water - too much, too little and too dirty," said senior engineer Wang Lubing, manager of the support project department.

The concept may be simple, but implementation requires delicate design and hard work, he said.

Designers divide the airport into 144 parts, labeling them according to their features, such as function zone, working zone and flight zone. Of those, the flight zone accounts for two-thirds of the total area. By 2040, the airport will have a footprint of 45.8 square kilometers.

"Water and snow cannot stand on the runways in the flight zone. So when we designed the runway support system, we focused on how to drain retained rainwater, with ideas such as tilting runway and other collateral design to release water quickly from the surface," Wang Lubing said.

An artificial lake as big as 2.7 million cubic meters will be built to store rainwater. A 420,000 sq m wetland park will also be built.

In July 2012, Beijing experienced heavy rains and floods that killed 79 people. More than 500 flights were canceled and about 80,000 passengers were stranded at Beijing Capital International Airport.

Wang said the new airport will function well even in heavy weather like that.

"Not a single drop of water is needed to be released," he said. Rather, the sponge airport can absorb, store and drain extra water.

In some zones, designers included water storage facilities to utilize the water later, such as in flushing toilets, washing cars and watering plants.

The extra rain will be released to the wetland park though a drainage system that will purify it.

"Nature is the largest and most powerful purifying system," Wang said.

To benefit passengers, permeable bricks will be installed on sidewalks at the new airport. Rainwater will penetrate the bricks and supplement underground water.

For travelers, both engineers expressed hope that travelers would enjoy the sponge airport - keeping their shoes dry in light rain and driving smoothly even in floods.