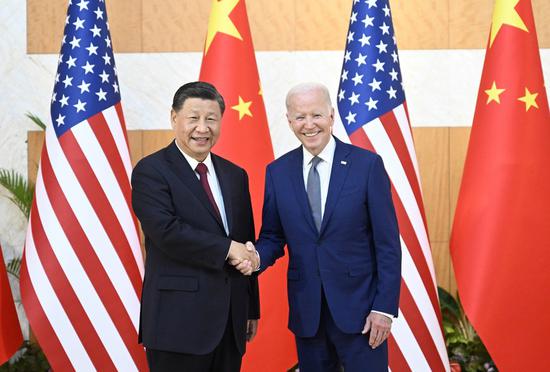 Chinese President Xi Jinping and his U.S. counterpart, Joe Biden, had a candid and in-depth exchange of views here on Monday on issues of strategic importance in China-U.S. relations and on major global and regional issues.

Xi pointed out the current state of China-U.S. relations is not in the fundamental interests of the two countries and peoples, and is not what the international community expects.

China and the United States need to have a sense of responsibility for history, for the world and for the people, explore the right way to get along with each other in the new era, put the relationship on the right course, and bring it back to the track of healthy and stable growth to the benefit of the two countries and the world as a whole, Xi said.

Xi expounded on the 20th National Congress of the Communist Party of China (CPC) and its key outcomes, pointing out that the domestic and foreign policies of the CPC and the Chinese government are open and transparent, with clearly stated and transparent strategic intentions and great continuity and stability.

China is advancing the rejuvenation of the Chinese nation on all fronts through a Chinese path to modernization, basing our efforts on the goal of meeting people's aspirations for a better life, unswervingly pursuing reform and opening-up, and promoting the building of an open global economy, Xi said.

China remains firm in pursuing an independent foreign policy of peace, always decides its position and attitude based on the merits of issues, and advocates resolving disputes peacefully through dialogue and consultation, Xi said.

Pointing out that the world is at a major inflection point in history, Xi said that countries need to both tackle unprecedented challenges and seize unprecedented opportunities, adding that this is the larger context in which the two sides should view and handle China-U.S. relations.

China-U.S. relations should not be a zero-sum game where one side out-competes or thrives at the expense of the other, Xi said. The successes of China and the United States are opportunities, not challenges, for each other. The world is big enough for the two countries to develop themselves and prosper together, he added.

The two sides should form a correct perception of each other's domestic and foreign policies and strategic intentions, Xi said, adding that China-U.S. interactions should be defined by dialogue and win-win cooperation, not confrontation and zero-sum competition.

Xi said that he takes very seriously Biden's "five-noes" statement. China does not seek to change the existing international order or interfere in the internal affairs of the United States, and has no intention to challenge or displace the United States. The two sides should respect each other, coexist in peace, pursue win-win cooperation, and work together to ensure that China-U.S. relations move forward on the right course without losing direction or speed, still less having a collision.

Observing the basic norms of international relations and the three China-U.S. joint communiques is vitally important for the two sides to manage differences and disagreements and prevent confrontation and conflict, Xi said, noting that it is indeed the most important guardrail and safety net for China-U.S. relations.

Resolving the Taiwan question is a matter for the Chinese and China's internal affair, Xi said, adding that it is the common aspiration of the Chinese people and nation to realize national reunification and safeguard territorial integrity.

Anyone that seeks to split Taiwan from China will be violating the fundamental interests of the Chinese nation, Xi said, adding that the Chinese people will absolutely not let that happen.

China hopes to see, and are all along committed to, peace and stability across the Taiwan Strait, but cross-Strait peace and stability and "Taiwan independence" are as irreconcilable as water and fire, Xi said, expressing hope that the U.S. side will match its words with action and abide by the one-China policy and the three joint communiques. President Biden has said on many occasions that the United States does not support "Taiwan independence" and has no intention to use Taiwan as a tool to seek advantages in competition with China or to contain China. China hopes that the U.S. side will act on this assurance to real effect, he added.

Biden noted that he has known President Xi for many years and maintained regular communication, but nothing could substitute for the kind of face-to-face meeting today.

He congratulated President Xi on his election as General Secretary of the CPC Central Committee, saying that as two major countries, the United States and China have a responsibility to keep a constructive relationship.

The U.S. side is committed to keeping the channels of communication open between the two presidents and at all levels of government, so as to allow candid conversations on issues where the two sides disagree, and to strengthen necessary cooperation and play a key role in addressing climate change, food security and other important global challenges, which is vitally important to the two countries and peoples, and also very important to the whole world, he said.

Noting that how the U.S.-China relationship develops is of crucial importance to the future of the world, he said the United States and China have a shared responsibility to show the world that they can manage their differences, and avoid and prevent misunderstandings and misperceptions or fierce competition from veering into confrontation or conflict.

The U.S. side shares the view that it is necessary to work out the principles guiding U.S.-China relations, Biden said, adding that the two teams may continue discussions on the basis of the common understandings already in place, and strive for early agreement.

The U.S. government is committed to the one-China policy. It does not seek to use the Taiwan question as a tool to contain China, and hopes to see peace and stability across the Taiwan Strait, he added.