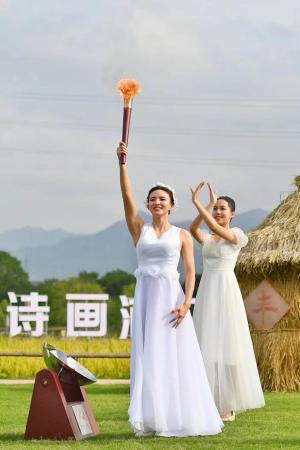 The flame of the 17th Games of Zhejiang Province is ignited in the Shangshan Archaeological Site Park in Pujiang county of Jinhua, Zhejiang province, on Wednesday. (Photo provided to chinadaily.com.cn）

The flame of the 17th Games of Zhejiang Province was ignited in the Shangshan Archaeological Site Park in Pujiang county of Jinhua, Zhejiang province, on Wednesday.

The first torchbearer in the relay after the lighting of the flame was Wang Congkang, another athlete from Jinhua and the first Olympian in Pujiang county. In August 2010, Wang made it to the Group A final of the men's 1000-meter kayak double at the Tokyo Olympics.

A total of 363 torchbearers will take part in the relay, which has seven stops — Lanxi, Yiwu, Dongyang, Pan'an, Yongkang, Wuyi and Jinhua's urban area.

The provincial Games of Zhejiang is the largest sporting event in the province and is held every four years.

This year, about 15,000 athletes from across Zhejiang are competing. The event features 910 disciplines from 34 sports, with 1,076 gold medals up for grabs.

The Shangshan archaeological site, which dates back 11,400 to 8,600 years, was discovered in 2000 by Jiang Leping, a researcher at the Zhejiang Provincial Cultural Relics and Archaeology Research Institute and his teammates.

In 2006, the Neolithic culture represented at the Shangshan site was officially defined as "Shangshan Culture". It is the oldest Neolithic culture ever found in the lower reaches of the Yangtze River and in China's southeastern coastal region.