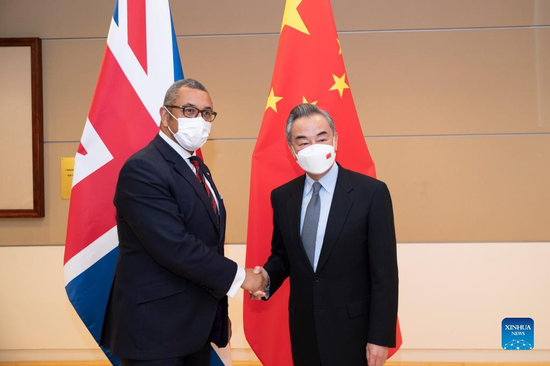 Chinese State Councilor and Foreign Minister Wang Yi meets with Britain's Secretary of State for Foreign, Commonwealth and Development Affairs James Cleverly on the sidelines of the ongoing 77th session of the UN General Assembly in New York, the United States, Sept. 20, 2022. (Photo by Liao Pan/Xinhua)

Chinese State Councilor and Foreign Minister Wang Yi met here with Britain's Secretary of State for Foreign, Commonwealth and Development Affairs James Cleverly on Tuesday on the sidelines of the ongoing 77th session of the UN General Assembly.

Noting that this year marks the 50th anniversary of the establishment of ambassadorial diplomatic relations between China and Britain, Wang said in the face of complex and grave challenges in today's world, the two countries, both as permanent members of the UN Security Council, should focus on mutually beneficial cooperation, and should avoid conflict and confrontation.

A sound China-Britain relationship is based upon mutual respect, with objective understanding as the prerequisite, and proper handling of differences as the key, Wang said.

He said he hopes that Britain's new government will view China and China-Britain relations from a strategic and long-term perspective, and work together with China in the same direction, adding that he hopes the two sides can treat each other as equals, steer clear of interference, and carry out mutually beneficial cooperation, so as to advance the bilateral relationship along the right track.

For his part, Cleverly noted that China, a major country with global influence, shoulders important responsibilities and plays an important role in the UN.

Britain is committed to establishing mutually beneficial and effective relations with China, helping both sides achieve growth, and promoting peace and security, so as to benefit the people of both countries, he said.

Britain stands ready to maintain open dialogue and exchanges with China, so as to create conditions for further cooperation between the two sides, he added.

Noting that for a long time Britain was developing relations with China ahead of other Western countries, Wang said the two countries should take the 50th anniversary as an opportunity to review and summarize the experience and lessons of the past 50 years, and to push forward the sound and stable development of bilateral relations.

China unswervingly pursues an independent foreign policy of peace, and is dedicated to establishing and developing sound relations with all countries, he said.

Wang said China advocates for practicing true multilateralism, upholds an open strategy of mutual benefit and win-win results, and is willing to share market opportunities with other countries and achieve common prosperity.

China stands ready to practice mutual respect, engage in candid dialogue, and advance mutual understanding with Britain, Wang said, adding that the two countries should safeguard the political foundation for bilateral relations and push forward the development of bilateral relations.

Britain should honour its pledge that Taiwan is part of the People's Republic of China, and unequivocally oppose "Taiwan independence," he stressed.

Noting that China's position on the crisis has been consistent, Wang said from the very beginning, China has been committed to promoting peace talks, and has supported all efforts conducive to achieving peace.

It is imperative to achieve a ceasefire and end the conflict, prevent new rounds of escalation of the situation, and jointly cope with the negative spillover effects of the crisis, he added.