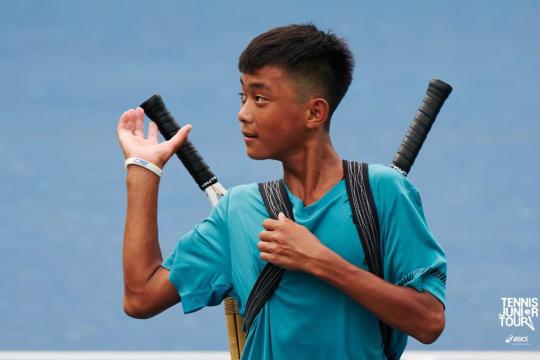 Tennis player Wang Fa, 14, said the sport opened a way out of his hometown in the mountains of Yunnan province and changed his life.

Wang won the championship in men's singles under 14 years old at the ASICS Tennis Junior Tour in Guangzhou, Guangdong province, in late August. As one of the first to play professional tennis in Cangyuan Wa autonomous county, Wang was selected by Zhang Xiaohong, chief coach of the Yunnan Wild Elephants Tennis Club when he was eight. At that time, the boy didn't even know what tennis was.

The coach asked several boys in the county to finish long- and short-distance running, and catch the ball. Wang's endurance and explosive force attracted Zhang.

"It would be a waste not to train such a talent," Zhang said.

Wang's parents didn't want him to learn tennis at first because they couldn't afford it. Zhang offered to teach him free of charge.

The first time Wang and his friends left the mountains, they were curious and excited. Several days later, some of them wanted to return home. To comfort them, Zhang treated them to delicious food and toys.

Every day, the children got up at 6:30 am, practiced all day and had academic courses at night. They needed to swing a racket more than 7,000 times, and run 9 kilometers.

The team traveled to cities such as Beijing, Shanghai, Guangzhou and Chengdu for tournaments. Wang's first was in Shenzhen, Guangdong province.

"I was nervous, because the outside world was so different from my home," he said, adding that tennis helped him make more friends and get a better education.

On camera, Wang looked confident. He said he wanted to be a professional athlete.