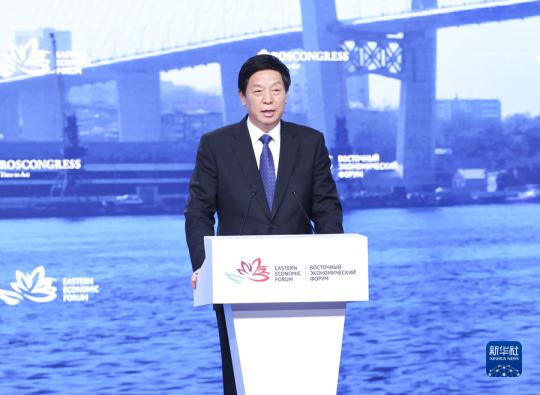 Li Zhanshu, chairman of the Standing Committee of the National People's Congress, the nation's top legislature, makes the remark while addressing the plenary session of the seventh Eastern Economic Forum, which is held in Russia's far eastern city of Vladivostok. (Photo/Xinhua)

China will continue to cooperate with Russia in Far East development as deepening such ties between the two countries will contribute to security and development in the region, Li Zhanshu, chairman of the Standing Committee of the National People's Congress, the nation's top legislature, said on Wednesday.

Li made the remark while addressing the plenary session of the seventh Eastern Economic Forum, which was held in Russia's far eastern city of Vladivostok.

Li said that China-Russia cooperation on Far East development had been initiated and promoted by the nation's heads of state.

Li stressed that the Global Security Initiative and the Global Development Initiative－both proposed by President Xi Jinping－have contributed China's wisdom and solutions to addressing the problems of the times.

China stands ready to work with the international community to implement the initiatives to deliver substantial benefits to people around the world, he added.

In terms of deepening cooperation on Far East development, Li called for implementing the Global Security Initiative to uphold peace and stability in the region and carrying out the Global Development Initiative to bolster regional openness and integration.

He also called for deepening the alignment of the countries' development strategies to enhance bilateral cooperation.

Under the theme "The Path to a Multipolar World", this year's forum aims to put global change led by new economic models in the spotlight and provide a dialogue platform for all stakeholders.