Year-old Beijing bourse seen as a cradle for SMEs 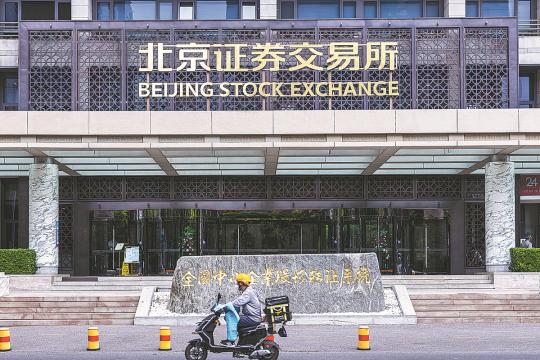 The Beijing Stock Exchange has grown into a cradle for technologically advanced small and medium-sized enterprises since its inception a year ago, and new mechanisms and products in the pipeline, including the launch of a BSE 50 index, will further stimulate the development of innovative SMEs and the maturity of the Chinese capital market, experts said.

The bourse announced on Friday night that a broad-based index comprising 50 large companies will be introduced, which will be its first benchmark index.

The index will provide a gauge to better measure profits in the secondary market, said Zhou Yunnan, founder of private fund manager Beijing Nanshan Jingshi Investment. More index-based products will be developed, attracting incremental capital to the exchange and elevating the exchange's liquidity and trading activity, he said.

Wang Jianjun, vice-chairman of the China Securities Regulatory Commission, said during a forum on Sunday that the BSE should be home to more industry leaders to increase the exchange's influence.

Zhou Guihua, the bourse's chairman, said at the same forum that more efforts should be made to enrich and diversify the exchange's investors.

Foreign institutions are welcome to participate in the stock underwriting and product design at the BSE, Li Wenhong, head of the Beijing Bureau of Local Financial Regulation and Supervision, said at the forum.

The exchange also started soliciting public opinions on Friday regarding the detailed rules of margin trading and securities lending.

Zhang Keliang, head of market making at Bohai Securities, said that the introduction of margin trading at the BSE, which comes together with the new index, has reflected the accelerated completion of the trading mechanism at the exchange.

A total of 110 companies have been listed on the exchange since the establishment of this new bourse was initiated at the China International Fair for Trade in Services on Sept 2 last year. These companies have raised over 23.5 billion yuan ($3.4 billion) through their initial public offerings at the BSE, as the exchange calculated.

According to market tracker Wind Info, companies listed on the BSE had nearly 44.5 billion yuan in sales revenue in the first half of 2022, up 32.68 percent year-on-year－compared with the average 9.24 percent year-on-year turnover increase recorded by all A-share companies during that period.

Development of strategic emerging industries has been a highlight of the year-old exchange. More than 80 percent of the BSE companies are from the industrial materials, information technology and healthcare industries. In addition, 23 companies have been recognized by the Ministry of Industry and Information Technology for their special roles in a niche sector, high market share and innovative capacity.

The ongoing optimization of the trading mechanism at the exchange has made the exchange more inclusive, facilitating the SME's going public, said Li Zhan, an economist at China Merchants Fund.

"SME's financing demand, which is more flexible and diversified, usually requiring smaller amounts but faster approval, has been well addressed at the BSE, which advanced technology innovation and China's industrial upgrading," he said.

Chen Li, chief economist at Chuancai Securities, said that the BSE has been increasingly better connected with the 3-year-old STAR Market at the Shanghai exchange, which nurtures "hard tech" companies from such industries as the integrated circuit and biomedicine. That connection will help build a multilayered capital market in China and serve the real economy with substantial technology advancement.

Since STAR Market trading officially commenced on July 22, 2019, it has attracted 162 new-age information technology companies, 93 biopharmaceutical companies, 76 high-end equipment manufacturers and another 56 new material makers. They make up nearly 90 percent of all the 437 companies listed at the STAR Market.

"These companies' substantial development, as well as the systematic progress such as the registration-based IPO mechanism first experimented with at the STAR Market, have all facilitated China's economic upgrading and restructuring," he said.