Naval competitions get underway in Qingdao 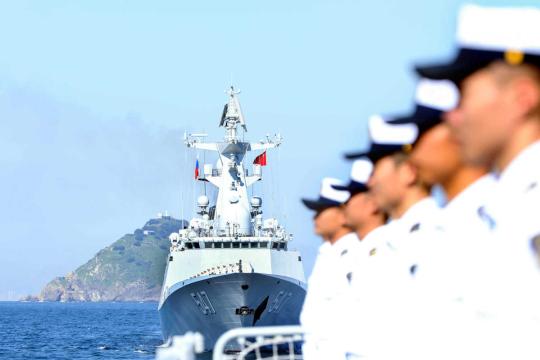 Officers and soldiers line the deck of the CNS Handan, a Type 054A-class guided-missile frigate, for the opening ceremony of the Sea Cup contest, part of the International Army Games 2022, in Qingdao, Shandong province, on Wednesday. (YU QINGZHENG/FOR CHINA DAILY)

Sailors from the Chinese and Russian navies have begun to compete in a combat skills contest in Qingdao, a port city in East China's Shandong province, on Wednesday.

Crew members of the CNS Linyi, a Type 054A-class guided-missile frigate from the North Sea Fleet of the People's Liberation Army Navy, and the Gromkiy, a Steregushchiy class corvette from the Primorskaya Flotilla of the Russian Pacific Fleet, will participate in the Sea Cup contest, a competition among surface ships and part of the International Army Games 2022, according to a news release from the PLA Navy.

At the opening ceremony in Qingdao on Wednesday, Senior Captain Li Lie, a commanding officer at a PLA Navy base and chief organizer of the contest, said the PLA will establish a fair, transparent competing environment and provide all necessary support to the event to make it a platform for friendship and cooperation between the two militaries.

Captain 1st Rank Bagdasarov, deputy commander of the Primorskaya Flotilla, was quoted as saying by the news release that the contest will enable both sides to learn from each other and deepen mutual understanding.

It will also serve to enhance the bilateral strategic partnership and facilitate joint efforts to handle military threats on the sea.

The Sea Cup, which is scheduled to conclude on Sunday, involves live fire, air defense maneuvers, search and rescue as well as anti-terrorism and anti-piracy deployments.

The International Army Games 2022 is being held from Saturday until Aug 27 in 12 countries. Nearly 280 teams from 37 countries will take part in 36 competitions, the Russian defense ministry said in a statement.

In the Xinjiang Uygur autonomous region in northwestern China, ground force personnel from nine teams from China, Russia, Belarus, Iran and Venezuela are taking part in two contests-the Suvorov Onslaught, a contest between infantry vehicle crews, and the Safe Route, a minesweeping contest for military engineering troops. The contests began on Saturday in Korla, Xinjiang.

The competitions will last two weeks and a closing ceremony is scheduled to be held on Aug 26.