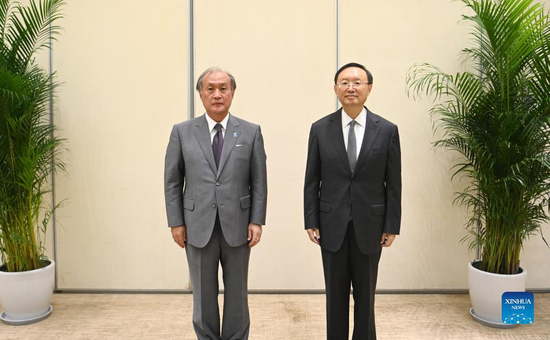 Yang Jiechi, a member of the Political Bureau of the Communist Party of China (CPC) Central Committee and director of the Office of the Foreign Affairs Commission of the CPC Central Committee, co-chairs the ninth China-Japan high-level political dialogue with Takeo Akiba, secretary general of Japan's National Security Secretariat, in Tianjin, north China, Aug. 17, 2022. (Xinhua/Zhao Zishuo)

Yang Jiechi, director of the Office of the Foreign Affairs Commission of the Communist Party of China Central Committee, on Wednesday co-chaired the ninth China-Japan high-level political dialogue in Tianjin with Takeo Akiba, secretary general of Japan's National Security Secretariat.

Yang said that the 2,000-year history of exchanges between China and Japan and the 50th anniversary of the normalization of diplomatic relations have taught both sides that peaceful coexistence and friendly cooperation are the only right choice for the China-Japan relationship.

The two countries should take the key consensus of their leaders as the political guidance, uphold strong sense of responsibilities, insist on their own convictions, eliminate internal and external interference, and work together to build a China-Japan relationship that meets the requirements of the new era, said Yang.

Facing the complex global situation, the regional and global significance of China-Japan relations has become more prominent, Yang said, adding that the Global Development Initiative and the Global Security Initiative were proposed in response to common aspirations for peace and development.

He said Taiwan is an inalienable part of China's territory, and the Taiwan question bears on the political foundation of China-Japan relations and the basic trust and good faith between the two countries.

Japan should focus on the fundamental and long-term interests of the two countries and their peoples, shape up a right perception of China, pursue a positive, pragmatic and rational China policy, and uphold the right direction of peaceful development, Yang said.

He said the Japanese side should abide by the four political documents and political consensus between the two countries, and work with China to enhance political trust, abandon the "zero-sum" mentality, properly manage differences, and promote bilateral ties to be more mature, stable, healthy and stronger.

The two sides also exchanged views on international and regional issues of common concern. The two sides agreed that the dialogue was candid, in-depth and constructive, and some useful consensus was reached. They will continue to maintain dialogue and communication, according to a press release.