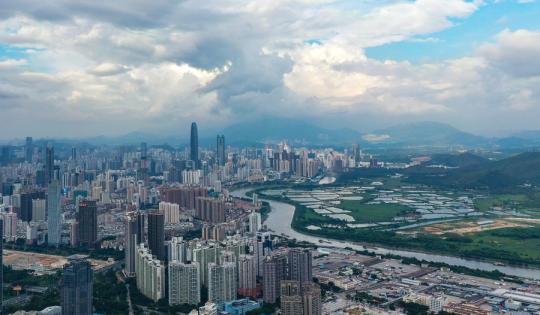 China is resilient and can respond to economic risks, negative factors and crises, experts say.

"My view is that a systemic crisis is still pretty unlikely to occur in China," said Thomas Orlik, chief economist at Bloomberg Economics.

Orlik spoke at the event "Will the Bubble Still Not Pop? A Discussion of China's Economic Future" hosted by the Center for Strategic and International Studies on Thursday.

He published the book China: The Bubble That Never Pops in 2020, suggesting that China's economy and financial system are "more resilient than critics in the West give them credit for", and China's economic and financial policymakers are "more innovative, more ingenious at better solving problems than critics here in Washington, DC, or on Wall Street give them credit for".

These were still the reasons why "there's nothing so far which looks like a systemic financial crisis" in China, he said.

Orlik also said China's economy had been hit by the pandemic, like that of the rest of the world, and "Chinese resilience is standing up in the face of the COVID-19 stress test".

"The bubble that never pops still is not going to pop," Orlik said.

"In a global pandemic, we really can't talk about winners, but China has lost less than most other major economies."

Specifically, Orlik said that in public health, China performed "extremely well". In growth, China had a V-shaped recovery after controlling the first COVID-19 outbreak in 2020. But the picture became less positive after the Omicron outbreak and lockdowns in several major cities, leading to weak growth in the second quarter of this year.

In the long run, Orlik said, the United States and China would be closer to each other in terms of their share of the global economy, though no one can tell the exact timing of it.

Data released by China's National Bureau of Statistics on July 15 shows that China's GDP grew by 0.4 percent year-on-year in the second quarter of this year. The Chinese economy grew 4.8 percent in the first quarter, and fell back significantly in the second quarter, leading to GDP growth of 2.5 percent in the first half of the year. China's full-year economic growth target is 5.5 percent.

It is a "challenging moment" for China and the US with long-term economic uncertainty, Orlik said. For China, he suggested grappling with problems in the real estate sector to avoid triggering bigger troubles. For the US, he warned that high inflation and aggressive tightening by the Federal Reserve may take the US into a recession.

Joyce Chang, chair of global research at JP Morgan, said China is capable of easing policies and using stimulus to avoid systematic crisis and still has "a lot of tools" to rebound.

"Quarter-to-quarter growth came down 8.7 percent. But for the third quarter, we are looking for a rebound. It's probably going to be in the quarter-to-quarter over 10 percent after declining 8.7 percent. We have 5.7 percent for the fourth quarter and the year growth forecast at 3.2 percent," Chang said on China's growth data and forecast.

Arthur Kroeber, head of research at Gavekal Dragonomics, said China is unlikely to suffer a crisis, but it does not mean that it is "immune to crisis".

"The system is very resilient, and the ability to respond to crisis is much higher than most people give credit for," Kroeber said. He also suggested China focus more on microeconomic forms of competition and tax law rather than paying too much attention on deploying capital.

Yao Yang, dean and professor of the National School of Development at Peking University, said the opinions vary among Chinese economists on China's growth prospects.

"In the long run, I am actually more optimistic than most people. I believe that at the end of this decade, the Chinese economy is going to become as strong as the American economy," Yao said.

China leads in many areas of technology and production, such as electric vehicle production which is "phenomenal", he said.

Nicholas Lardy, a nonresident senior fellow at the Peterson Institute for International Economics, said China's role in foreign investment, international trade and the global economy is increasing even during the pandemic.

"I would point out that China has actually continued to strongly converge on the advanced economy levels in 2020, 2021, and again this year," Lardy said.