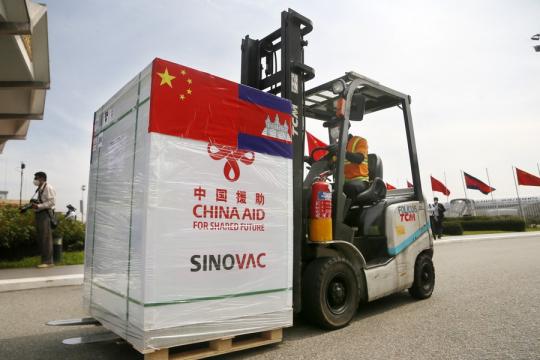 All incumbent leaders of the Communist Party of China and the State have been vaccinated with domestic COVID-19 vaccines, "showing that they attach great significance to virus control work and have great confidence in Chinese-made vaccines", a senior health official unveiled on Saturday.

Zeng Yixin, deputy director of the National Health Commission, also told a media briefing that three domestic vaccines have obtained emergency use authorization from the World Health Organization, and more than 100 countries have approved Chinese-developed shots for public use.

"The leaders of more than 30 countries, including Turkey, Serbia, Cambodia and Chile, have been vaccinated with Chinese vaccines, which adds to the proof that Chinese vaccines have achieved widespread recognition from the international community," he said.

China's COVID-19 vaccines are safe and have gained global recognition, experts and officials said on Saturday while calling on the elderly to get inoculated and boosted to protect against severe infections and deaths.

Wang Fusheng, head of the infectious disease department at a unit of the Chinese PLA General Hospital, said online information that COVID-19 vaccines can trigger leukemia and diabetes, affect genetic development, cause tumor metastasis or antibody-dependent enhancement is irresponsible and false.

The numbers of hospital visits and hospitalizations for leukemia and diabetes were similar from 2018 to 2022, he said during a news briefing held by the State Council's Joint Prevention and Control Mechanism.

"If COVID-19 vaccines could cause these diseases, we should have seen a marked increase in the numbers. But in reality, there is no such rise," he said.

Feng Zijian, vice-president of the Chinese Preventive Medicine Association and former deputy director of the Chinese Center for Disease Control and Prevention, said that 3.4 billion homegrown COVID-19 vaccines have been administered on the mainland, and monitoring data shows that domestic vaccines are very safe, with the rate of adverse effects being slightly lower than that of regular vaccines, such as those against polio and influenza.

As of May 30, the mainland had administered 3.38 billion COVID-19 doses and had received about 238,000 reports of adverse reactions following immunization, the majority being local pain, redness, induration and fever.

According to an analysis of Omicron-infected patients reported from March to June on the mainland that was conducted by the China CDC, when compared with the unvaccinated, completing primary vaccination can reduce the risk of coming down with severe symptoms by 89 percent for those over age 60, and a booster shot can lower the risk by 95 percent.

However, the vaccination coverage among seniors above age 80 and of booster shots among all elderly people in China remains relatively low, Zeng said.

"China has about 35 million people age 80 and above. About 40 percent have not finished getting primary inoculations, and 62 percent have not gotten a booster jab. The risk of them developing severe illnesses and even dying of the virus after infection is high," said Feng, the former China CDC official.

"We should make use of the time window earned through implementing our dynamic zero-COVID strategy to accelerate immunization, especially among the elderly," he said.

The BA.5 subvariant of Omicron has spread to over 100 countries and regions, leading to an increase in infections and hospitalizations and heaping pressure on China's defense against imported cases, the commission said on Saturday.

On Sunday, the mainland reported 87 confirmed locally transmitted infections and 782 asymptomatic cases. Gansu province and the Guangxi Zhuang autonomous region are the hardest-hit regions during this round of outbreaks.