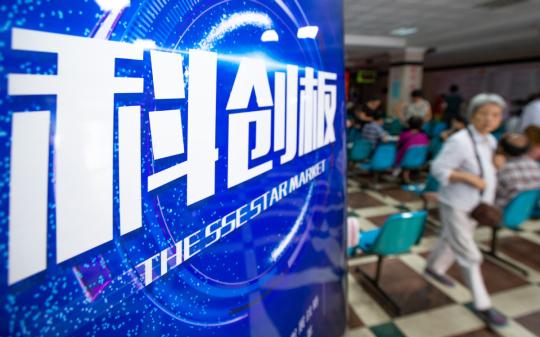 A poster at a securities brokerage in Nanjing, Jiangsu province, promotes the STAR Market. （Photo by Su Yang/For China Daily）

The tech-heavy STAR Market on the Shanghai bourse, which celebrates its three-year anniversary on Friday, has grown into a testing ground for systematic breakthroughs in the capital market and a key driver to serve the country's development in the real economy, experts said.

President Xi Jinping announced in November 2018 that a new board to nurture technological advancement should be set up on the Shanghai Stock Exchange, along with the implementation of a registration-based initial public offering mechanism.

With trading officially commencing on July 22, 2019, the STAR Market has seen 437 companies successfully list over the past three years, with a combined market cap of 5.76 trillion yuan ($852 billion).

Data from market tracker Wind Info showed that the STAR Market has attracted a total of 162 new-age information technology companies, 93 biopharmaceutical companies, 76 high-end equipment manufacturers and another 56 new materials firms. Together they make up nearly 90 percent of all companies listed on the tech-focused board.

"Hard technology", or advanced technologies and strategic emerging industries, have become a major feature of the STAR Market, said the Shanghai bourse in a news release in late April.

As of Thursday, a total of 33 STAR Market companies have released their interim results for the first half, according to Wind Info. A majority－21 of them－reported higher profits, with 13 reporting year-on-year surges of over 100 percent and another six reporting rises of between 50 percent and 100 percent.

The average annual profit growth rate of all STAR Market companies will be 22.35 percent in 2022, Guosheng Securities forecast.

Systematic innovations have been a major highlight of the three-year-old board, said market experts.

Till date, 38 companies made their STAR Market debut without having previously been profitable, which is a major requirement threshold for listing on the A-share main board.

Zhao Haizhou, associate partner at Deloitte East China A-share department, said that the relaxed requirements on profitability are extremely attractive for "hard tech "companies, since these enterprises often surge after huge amounts of preliminary investment but may not become profitable for even a decade.

More importantly, the registration-based IPO mechanism, which was first given a trial run on the STAR Market and promoted to the ChiNext in August 2020 and the Beijing Stock Exchange in November last year, has provided a relatively relaxed capital environment for companies, said Shao Yu, chief economist of Orient Securities. The mechanism has largely helped improve IPO efficiency and facilitated China's high-quality economic growth, he said.

The promotion of the registration-based IPO mechanism throughout the A-share market will be one focus this year, the China Securities Regulatory Commission, the country's top securities watchdog, said in a meeting at the beginning of the year.

"The market value of stocks will therefore be closer to their intrinsic value as pricing will be more precisely made. Price volatility will also be better contained as brokerages can use their treasury stocks and capital to address fluctuations in market supply and demand," the analysts added.