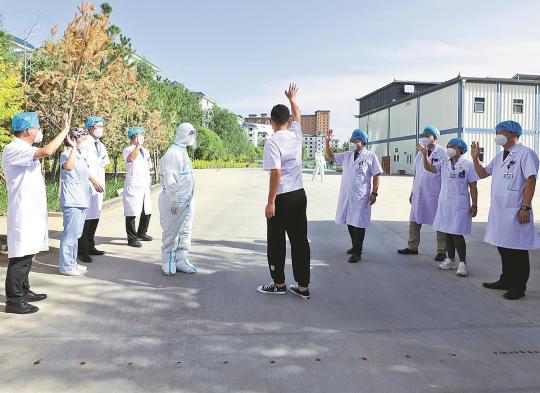 An asymptomatic carrier of COVID-19 (center) waves goodbye to medical workers at a makeshift hospital after finishing his medical observation in Zhangye, Gansu province, on Wednesday. He will undergo a seven-day health monitoring at home. (Photo by WANG JIANG/FOR CHINA DAILY)

Dong Xiaoping, chief virologist at the Chinese Center for Disease Control and Prevention, said during a news conference that the BA.4 and BA.5 strains are more transmissible than other subvariants of Omicron, but their pathogenicity－meaning the virus' ability to attack human bodies－currently shows no major difference from other strains.

With BA.4 and BA.5 variants having become dominant in some regions and triggered fresh infection spikes in parts of Europe and America, he said the incidence and mortality rates of the disease will likely rise, citing results of epidemiological models.

"However, there is no evidence to show that non-pharmaceutical interventions (such as mask wearing and keeping social distance) will no longer work," he said. "In other words, China's current virus containment measures remain effective."

To better cope with the highly transmissible and stealthy Omicron strain, Dong said the latest disease control guideline, issued by the National Health Commission in late June, has underscored early detection of the virus.

"The new guideline has clarified monitoring rules for high-risk workers, added drugs into its monitoring system and used antigen tests as an additional tool," he said. "Deployment of such new strategies and technologies will greatly boost our capability to identify Omicron cases."

Research into upgraded COVID-19 vaccines tailored to emerging strains is underway, according to Dong, but more time is needed to roll out third-stage human trials and decide on whether to replace current vaccines based on the original strain.

Dong noted that some in-vitro experiments demonstrate that the effects of neutralizing antibodies generated following immunization on the two new strains decreased, but whether the protection of existing vaccines will diminish in real-world cases is unclear.

"Domestic and foreign experts believe that current vaccines remain effective, and getting vaccinated and, in particular, boosted, is still the best approach to fend off the virus for the elderly and those with underlying diseases," he said.

As of Wednesday, China had fully vaccinated nearly 89.7 percent of its population and 84.5 percent of people aged 60 and above, according to the National Health Commission.

Dong added that the novel coronavirus will continue to mutate for a long time and Omicron won't be the last mutation. "We will focus on monitoring new strains as well as their transmissibility, pathogenicity and ability to evade immunity," he said.

On the mainland, 21 provincial-level regions had reported new locally transmitted infections in the past week, some being caused by BA.4 or BA.5.

He Qinghua, an official with the commission's bureau of disease prevention and control, said that new outbreaks in Gansu and Henan provinces, as well as the Guangxi Zhuang autonomous region are developing.

"Most domestic infection clusters can be contained in a short period and the epidemic's impact is limited," he said. "The capability and efficiency of local disease control work has improved."

On Wednesday, the mainland reported 148 locally transmitted, confirmed infections and 678 asymptomatic cases, compared with 108 and 827 respectively for the previous day.