Xinjiang farmers indignant about being labeled by U.S. lies(2)

Twenty-six years ago, tomato planting was still a laborious job. From spring to autumn, Bai and his wife worked from dawn to sunset. In Xingfu Village, which is adjacent to the Gurbantunggut Desert, the temperature difference on a summer day is huge. At noon, the temperature could peak at 35 degrees Celsius, and at night, Bai would have to wrap himself in a thick cotton coat when patrolling and watering his fields.

Growing tomatoes also requires certain technology. The EU and other markets have strict regulations on pesticide residue, the heavy metal content of soil, and so on. Bai must choose specific pesticides and control the proportion of fertilization precisely. Under the guidance of technicians sent by tomato processing companies, he and his wife began to learn how to plant high-standard processing tomatoes.

"If we worked more, we could hire less people. But during the transplant and harvest days, you still had to find some helpers," Bai said.

Moreover, frost and heavy rainfall are common on the northern slope of the Tianshan Mountains, where Xingfu Village is located, when summer turns to autumn. "If the ripe tomatoes were not picked in time, they would end up being wasted. The whole year's hard work would be in vain," he said.

To motivate workers during the harvest days, Bai paid them in cash daily, and his wife prepared steamed bread buns, pickles and water for them free of charge.

Due to their hard work, the couple saw their income increase year by year, which in turn encouraged them to invest more in tomato planting. In 2004, Bai planted all 40 mu of his land with tomatoes and contracted another 10 mu to expand production.

"A disastrous decline in the tomato business was the last thing we expected," Bai said. That autumn, Bai experienced the "darkest hour of his life": Ripe tomatoes were left to rot as there was no one to buy them.

It took Bai a long time to understand that in 2004, many farmers switched to planting tomatoes, surpassing the capacity of tomato-processing factories. Eventually, it led to oversupply and turbulence in the market. 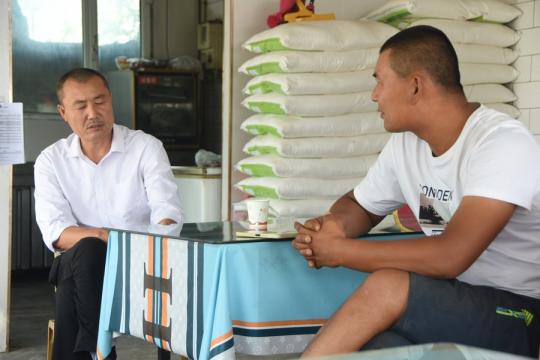 After 12 years, Bai Yang, Bai's younger son, went to his father and proposed they plant tomatoes again. This suggestion was immediately rejected by Bai Jingui, who had still not recovered from 2004.

But Bai Yang had not been careless in making his proposal. In 2015, drip irrigation was widely applied across Xinjiang and had become popular in their village. And by then, tomato transplanting, insecticide spraying and harvesting could all be completed with machines.

The technological revolution boosted the industry, with the tomato yield per mu rising from 5 to nearly 10 tonnes, and with mechanized harvesting by then costing less than half the price of manual harvesting. "There were several tomato millionaires in our village," Bai Yang said.

In the spring of 2020, Bai Yang finally persuaded his father. "We borrowed about 600,000 yuan from the bank and contracted more than 300 mu of land to plant tomatoes. I was under high pressure," Bai Yang said.

Bai Yang's first production year was bumpy as the purchase price dropped due to the COVID-19 pandemic. Fortunately, he had signed an order contract with a tomato processing company to ensure a reasonable price. In the autumn that year, his harvest was a success and he gained his father's trust.

"Last year, the market price was much higher than our order price, but I didn't break the contract as I wanted to have long-term cooperation with the tomato processing company," Bai Yang said.

This year, the family's tomato planting area reached 520 mu. To meet the strict food safety standards of Europe and other overseas markets, tomato seeds, pesticides and other materials are provided by the tomato enterprises themselves.

"Growing tomatoes is easier now, but it has also become more complicated," Bai Jingui said, referring to the uncertainties created by the United States' smear campaign and sanctions against Xinjiang. What insulted him most was that farmers like him were stigmatized by certain politicians as human rights abusers.

"We cook free lunches for those who help us because we were all hardworking farmers, and no one should mistreat another. I think people should be kind to each other, and that is what we are doing," he said.

"Xinjiang produces the world's best tomatoes, so it's a blessing for us and the whole world. Anyone slandering that is ruining this blessing," he said.

"But we farmers won't give up creating better lives for our families. That is what we want to do, and we are not forced to do that by anyone," he said.