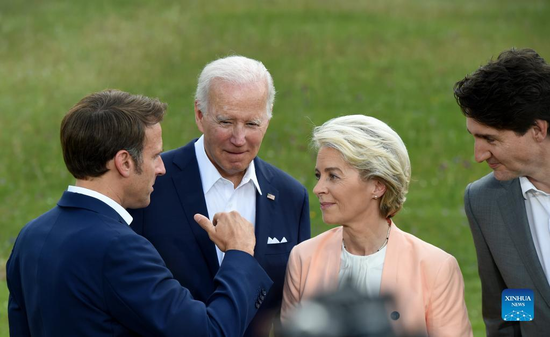 The three-day G7 summit opened here Sunday amid protests as hundreds of people took to the streets in the southern German town.

Thousands of other protesters also held demonstrations in Munich, the capital of Bavaria, a day before the summit.

They demanded that the G7 countries fulfill their responsibilities and become more active in tackling climate change and global hunger, among other issues.

Speaking to Xinhua in a town not far from where the summit was held, protester Brigitte Obermayer said that the world's problems cannot be solved by G7 countries alone and can only be truly solved through platforms such as the United Nations.

Another protester named Marco, who is a member of youth organization SDAJ, criticized the G7 for only caring about its own interests, adding that the summit is held only to consider and discuss issues related to the interests of its members and related interest groups.

Theresienwiese, the heart of the protest in Munich, was filled with protesters from many parts of Europe, waving banners and posters and singing protest slogans. A total of 15 NGOs took part in the day's activities.

A large police presence was seen at the sites of protests. Around 18,000 police officers have been deployed around Munich and the summit site.

A design in which a distorted Earth is embedded in the letter G stands out in the posters. An NGO member told Xinhua that it was intended to convey the message that "the world is becoming increasingly distorted and dysfunctional due to the intervention of the G7 countries."

Viviane Raddatz, head of climate and energy division at WWF Germany, told Xinhua that she was "certainly not satisfied" with the work done so far by the G7 countries in terms of climate protection.

Raddatz said that as "old industrialized countries with a long history of emissions... they (G7) are responsible for causing the climate crisis and therefore have a responsibility to find solutions that apply worldwide."

Friederike Meister, Germany Director of Global Citizen, an organization working against extreme poverty, said that "the world's major crises are worsening, but the money from rich countries to help recover economically does not reflect that."

"The G7 must now prioritize investment in the world's poorest countries," said Meister, adding "The G7 are carrying around this decades-old promise without really implementing it."

Speaking to Xinhua, Lisa Gaetner, a local resident, complained about the current high prices and inflation, saying that "ordinary people have less and less money."

The G7 countries should reduce their military spending and increase their efforts to combat climate change, she said.