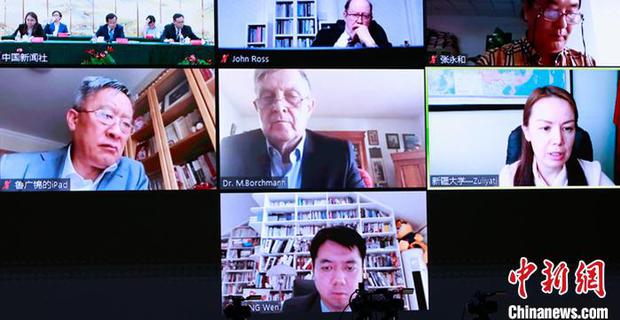 7 Scholars have been invited to discuss certain topics on May 19th, with Michael Borchmann in the middle. (Photo: China News Service/Sheng Jiapeng)

My personal academic way lasted only 2 years at the German University of Administrative Sciences, where I did research on German state organization and the theory of government duties. But I could not resist when I was asked to change into the Chancellery of the Prime Minister of Hesse. So my contribution will be a rather practical one, rooted in 35 years of professional practice in the Ministry of Justice, the Ministry of Economy, the Ministry for InteriorAffairs, and mainly in the State Chancellery.

I am professionally dealing with China for more than 15 years. Recently I was dealing with the bad attacks by the U.S. and their obedient helpers in the question of the Hongkong security law. I gave interviews and wrote commentaries about it, demonstrating that this law is not much different from all these security laws of western states.

But already in this case I realized in which cloudy, dirty springs many attacks against China have their origin. Despite my long life- and professional experience, the dirty way of the attacks does not leave me indifferent. It is difficult for me to stay cool and relaxed during this debate. Because these attacks are anything but honest.

But our topic today is questions like Xinjiang and forced labor. Some obedient executors of the disgusting game with origin in Washington even use the word "genocide". This word is for me a symbol of what the U.S. did with its native people after its foundation. There is a traditional German saying: "People who live in glass houses shouldn't throw stones."

I have never been to Xinjiang. So let me argue with information by very serious people, by the wisdom of great German authorities.

My personal assessment of Xinjiang roots in 2 very honest and reliable Wechat-Contacts.

One is a Co-Founder of the green ecological party. He is married to a woman from Xinjiang and very often visited this province. He is really horrified by all the fake news our media spread about Xinjiang. And he is also horrified at how much the actual representatives of his party obediently let the U.S. lead them on the leash.

My second source is a lady from Xinjiang, living now in Germany. She confirms that China has done such a lot for the people in Xinjiang, getting them out of extreme poverty and deep backwardness. Those so-called Exile Uyghurs in the west, who permanently attack China, are in her eyes political tools of enemies of China. They hope to get advantages or even are paid by dark forces.

And even organizations, which give the public the impression of being international and neutral, are finally tools of the U.S. As an example let me mention the organization Human Rights Watch. A couple of years ago the Nobel Peace Prize Laureates Adolfo Pérez Esquivel and Mairead Maguire, the former UN Deputy Secretary-General Hans von Sponeck, UNO special envoy Richard Falk, and more than 100 scientists and academics published a letter, in which they criticized the very close connection to the U.S.-Government.

Let me now refer to the German authorities I mentioned above.

The first one is our former German Chancellor Helmut Schmidt. When he passed away a couple of years ago, a popular German magazine had the headline: "The last German Statesman has gone." Helmut Schmidt praised ancient Chinese knowledge and culture. Concerning Human Rights he said, that they are neither mentioned in the Christian bible nor in the Islamic koran. The western concept of human rights is a result of western history. And he said: "As a German I defend human rights in my country, because the French revolution and enlightenment belong to our tradition. But I would never force another country with a different tradition to take this concept."

Let me furthermore mention the distinguished former politician Klaus von Dohnanyi, who had been – among other positions - federal minister for education and science, deputy foreign secretary and Mayor of Hamburg. Just this year he published a wise book about German interests. The motivation for the acting of the U.S. would neither be Human Rights nor western democracy, but the brutal pursuit of their interests to dominate the world.

Let me also quote Egon Bahr, who some weeks ago would have celebrated his 100th birthday. Bahr was the main advisor of our former Chancellor Willy Brandt, the father of the German détente policy. And the architect of this policy and the chief negotiator was Egon Bahr. He said in a speech, delivered to students: "In international politics human rights and democracy are not of any importance at all. The real motives and reasons for arguing with that are powerful interests. So don't believe, if something different is told you."

All these descriptions are in accordance with a commentary by the distinguished German sinologist Mechthild Leutner. She said that already in the 90s think tanks in the U.S. had developed the idea in case of further economic growth of China to isolate China by using the tool of Human Rights.

So my pessimistic conclusion is: The U.S. is not interested in Human Rights at all. They and their accomplices just need the propaganda with them to pursue their naked U.S. politics of interest, to dominate the world.