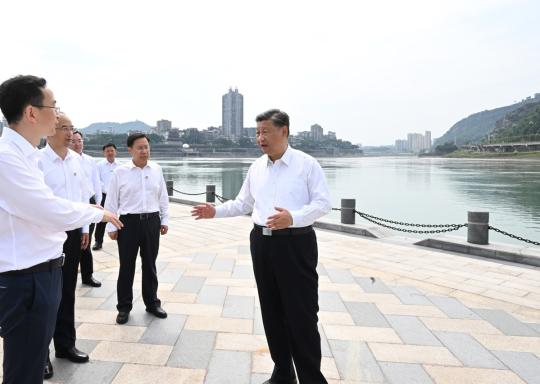 President Xi Jinping, who is also general secretary of the Communist Party of China Central Committee and chairman of the Central Military Commission, visits Yibin, Sichuan province, on Wednesday to inspect the ecological restoration of and efforts to protect the Yangtze River basin. (Photo by Li Xueren/Xinhua)

President Xi Jinping has called for efforts to effectively coordinate the COVID-19 pandemic response and socioeconomic development and overcome difficulties in economic growth in order to ensure social stability.

Xi, who is also general secretary of the Communist Party of China Central Committee and chairman of the Central Military Commission, made the remark while conducting an inspection tour in Sichuan province on Wednesday and Thursday.

He urged resolute implementation of the decisions and policies of the CPC Central Committee, and called for comprehensively promoting reform and development to maintain a healthy and stable economic environment, a prosperous and peaceful social environment and a clean and righteous political environment.

Xi reiterated the importance of firmly adhering to the dynamic zero-COVID policy, and called for efforts to firm up confidence to win the battle against the virus and take resolute action to consolidate the hard-won results of COVID-19 prevention and control.

As flooding and other geological hazards recently hit some areas across China, Xi highlighted the need to strengthen disaster prevention and control to protect people's lives, safety and property.

The inspection tour took Xi to the cities of Meishan, Yibin and Chengdu, where he visited a village, a historical and cultural site, a university, an enterprise and met with representatives of military officers stationed in Chengdu, the provincial capital.

Boosting grain production and rural vitalization were high on the agenda of Xi's inspection tour in Sichuan, which is a major rice producing area in western China.

While inspecting Meishan on Wednesday, Xi visited the village of Yongfeng, where he talked with local officials and farmers, and learned about local efforts in advancing the development of high-standard farmland and promoting grain production and rural vitalization.

Efforts should be made to develop eco-agriculture, green agriculture and high-efficiency farming to ensure that the Chinese people have firm control over their own food supply, he said.

Xi inspected the village's wastewater disposal facilities and a clinic, and learned about locals' efforts to improve their living environment and respond to the pandemic. He urged better construction of the grassroots-level Party organization in the village and encouraged it to unite and lead the villagers in promoting rural vitalization.

Agriculture, rural areas and farmers are seen as fundamental to the country's development and the people's well-being in China. Xi has attached great importance to such matters since he was elected general secretary of the CPC Central Committee in 2012.

On many occasions, he has reiterated the need to stabilize the fundamentals of the agricultural sector and ensure the nation's food security.

China has implemented a national plan to develop high-standard farmland to encourage high-yielding and stabilized grain production. By 2030, the nation will develop 80 million hectares of high-standard farmland to ensure a stable production capacity of 600 billion kilograms of food, according to the National Plan for Development of Well-Facilitated Farmland (2021-30) released in September.

In the meantime, rural vitalization has been prioritized in work in rural areas after the country eradicated absolute poverty nationwide at the end of 2020.

On Wednesday morning, Xi also visited the memorial temple and former residence of Su Xun and his two sons Su Shi and Su Zhe, three literary masters of the Northern Song Dynasty (960-1127), and called for protecting historical and cultural heritage.

Xi also visited Yibin University and the XGIMI optoelectronic company. During these visits, Xi underlined the need to promote the employment of college graduates and the independent innovation of enterprises.