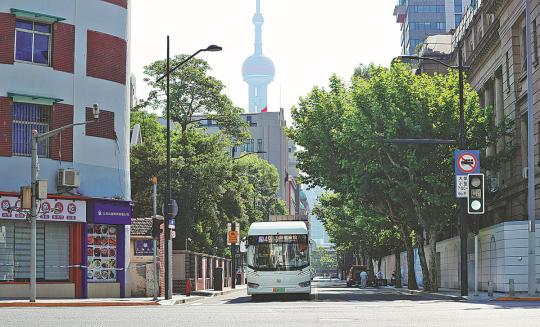 Over the past two weeks, a number of employees of the Shanghai Charity Foundation's branch in Changning district have been voluntarily helping passengers at the Shanghai Hongqiao Railway Station in a bid to help facilitate departures from the city.

Since May 22, the volunteers have offered bottles of drinking water, instant noodles, bread and face masks to people who planned to leave but were stranded at the railway station, according to a report in the Shanghai Observer, a local news outlet.

Under epidemic prevention requirements, people are allowed to enter the railway station if they can provide a negative result from a nucleic acid test taken within the past 48 hours and a valid train ticket.

Some passengers bought tickets but could not provide a negative test result, so they had to wait for notification outside the station.

Others had negative results but found it difficult to buy tickets because some rail routes have not fully reopened after the epidemic, the report said.

Although he needs to wear protective clothing to provide assistance, Zhou Haikang, one of the volunteers, told the news portal that it is meaningful to help others, especially after finding that the help he provides helps solve their difficulties.

On the evening of May 24, for example, Zhou and his peers discovered a group of people sitting near the station's departure gate, leaning against their suitcases in a bid to sleep.

After learning that they had not had any dinner, the volunteers provided bread and water, plus mosquito repellent for the hot night ahead, the report said.

The passengers were quoted as saying that they were sleeping at the gate because they did not want to miss the train that would depart at 6 am the next day.

However, after being told that a temporary waiting zone equipped with toilets had been set up in the station's parking area, the passengers took their luggage and followed the volunteers to the zone to rest, the report said.

It added that in recent weeks, many people who were stranded at the station have returned home. They expressed thanks to Zhou and his colleagues, with some saying that they would definitely return to Shanghai someday.