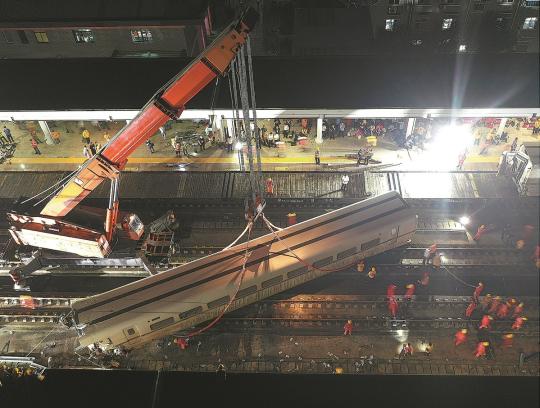 The D2809 train is hoisted by a crane to be transported away from Rongjiang station in Guizhou province on June 5, 2022. (Photo by WU MING/NANFANG DAILY)

Services resumed on a high-speed rail line in Southwest China's Guizhou province on Sunday, a day after a train derailment killed the train driver and injured eight others. The railway operator has vowed to immediately investigate the cause of the accident.

Two of the D2809 train's carriages came off the tracks at a point that had been hit by mud and rockslides just before arriving at Rongjiang station at around 10:30 am on Saturday, according to China State Railway Group, the national railway operator.

The train departed from Guiyang, capital of Guizhou, and was heading for Guangzhou, capital of southern China's Guangdong province.

The injured included a train attendant and seven passengers. They have been receiving treatment for non-life-threatening injuries at a local hospital.

A total of 136 other passengers were evacuated and transferred to safety, the railway group said, adding it had carried out inspections after the accident to ensure the network's safety.

An analysis of the train's data shows that the driver engaged the emergency brakes when he detected an abnormality on the track while the train was in a tunnel approaching Rongjiang station. The train then slid for more than 900 meters.

The anti-collision wall and the overall protection of the railway track structure prevented the train from falling off the track, other than the two carriages.

The Ministry of Emergency Management called for all-out rescue efforts after the accident.

While guiding the rescue and emergency response, the ministry called for an investigation into the cause of the accident, and for potential safety hazards along railway lines to be eliminated to ensure the safe operation of trains.

The ministry sent personnel to the scene to assist in the aftermath, and the local fire rescue team dispatched 52 emergency rescue workers.

The 857-kilometer line linking Guiyang with Guangzhou began operation in December 2014. Its trains travel at speeds of up to 250 km per hour, passing through Guizhou, the Guangxi Zhuang autonomous region and Guangdong.

More than 80 percent of the line consists of bridges and tunnels.