Cutting-edge scientific testing to be undertaken 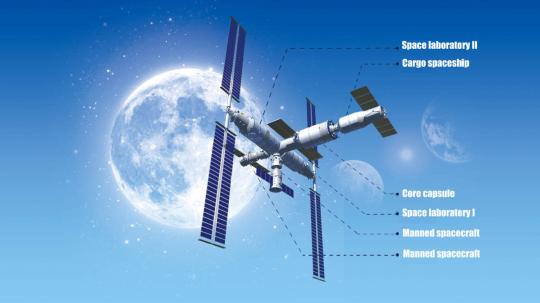 An illustration of China's space station. (Photo provided to chinadaily.com.cn)

Upon its completion by the end of this year, the Tiangong space station will extensively advance science and technology, said Lin Xiqiang, deputy head of the China Manned Space Agency.

There will be 25 scientific equipment cabinets inside the station after its two space lab components are connected with the core module, he told a news conference at the Jiuquan Satellite Launch Center on Saturday.

"Each cabinet is a small lab that can hold interdisciplinary experiments. Cabinets inside the Wentian lab will mainly be used to serve biological and life science work and can support research on the growth, aging and genetic traits of plants, animals and microbes in the space environment," Lin said.

"Equipment in the Mengtian lab will be focused on microgravity studies and will be used to carry out experiments in fluid physics, materials science, combustion science and fundamental physics."

Scientists said there will be a cutting-edge atomic clock instrument on the station that will help scientists revolutionize research in quantum mechanics, one of the most sophisticated spheres in physics.

The device, called a high-accuracy time-frequency cabinet, will be one of the most accurate chronometers ever built by man.