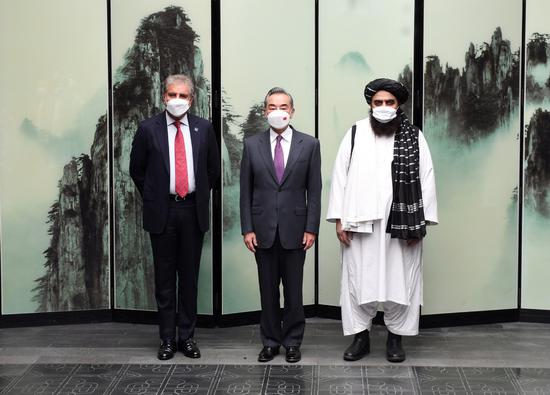 Under the current circumstances, China, Afghanistan and Pakistan should restart the trilateral cooperation mechanism and advance cooperation in the areas of politics, development and security, Chinese State Councilor and Foreign Minister Wang Yi said Wednesday.

The three parties should strengthen practical cooperation, promote the extension of the China-Pakistan Economic Corridor to Afghanistan, and help Afghanistan participate in regional interconnection, Wang stressed.

Qureshi said the Pakistani side supports Afghanistan in strengthening contacts with the world, adding that Pakistan is ready to continue to help Afghanistan improve people's livelihood.

For his part, Muttaqi said the Afghan side understands the international community's concern about the rights and interests of women and children, especially girls' education, and will promote it actively and step by step. The interim government has never banned girls from going to school and has reopened 60 percent of schools so far.

The Afghan side is willing to once again solemnly promise to China and Pakistan and the whole world that terrorists will never be allowed to use the Afghan territory to harm the interests and citizens of other countries, Muttaqi stressed.

Muttaqi thanked China and Pakistan for providing invaluable support for Afghanistan's development and reconstruction. Afghanistan is unwilling to rely on charitable assistance for a long time and hopes to strengthen the tripartite cooperation and actively participate in the joint construction of the Belt and Road.

The three parties also agreed to hold a formal dialogue among the foreign ministers of China, Afghanistan and Pakistan in due course.